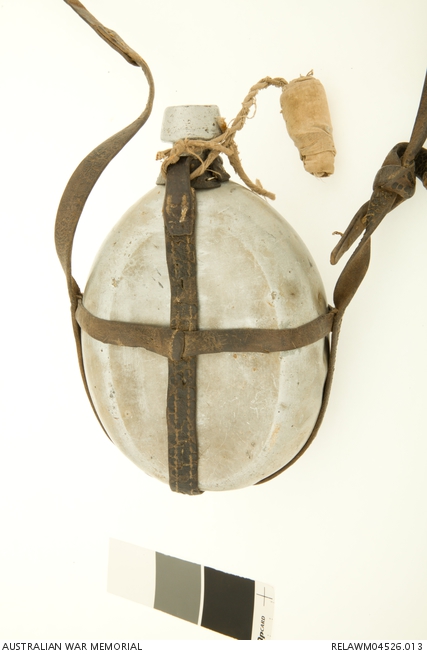 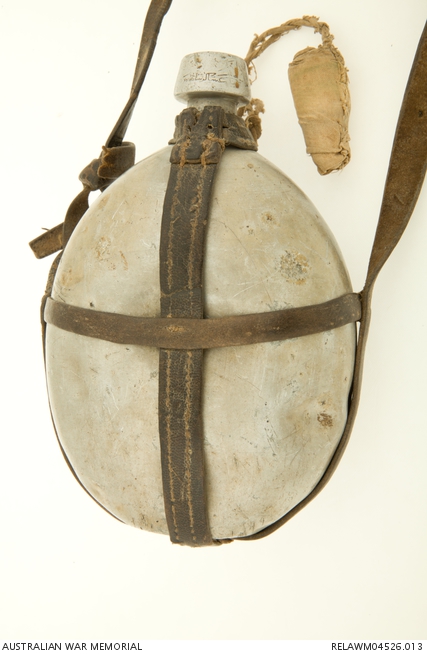 Early Turkish-pattern issue aluminium water bottle based on a German pattern, the inner face having a slightly flattened convex shape. Made with a short neck and wide spout; the spout lacks any evidence of having a screwtop and is likely to have originally been stopped with a cork; this has been replaced with a sewn, folded plug of cotton (it has been suggested this is a modification, making a simple water filter). This plug is attached to the leather harness with a cord of twisted cotton sewn to the plug; there is evidence that this cord has been broken and retied at least once. The stopper is engraved with Ottoman script for 'Asakr-i Shahaneh' meaning the 'Imperial Army'.

The leather harness appears to retain the original German leather collar around the throat of the canteen. The remaining harness is made up of a number of lengths of leather of differing widths, sewn together. The main sections are a shoulder strap and two '+' shaped side pieces, both sewn to the neck collar and the shoulder strap. A break in the shoulder strap section has been knotted to re-attach it.

No specific history on this water bottle is known. This particular pattern of water bottle was used by pre-First World War German military (from 1893), as well as in many armies including the British and Colonial Australian forces, from 1900, and Russian Imperial Army, from 1907, and was adopted and manufactured in Turkey from 1909.