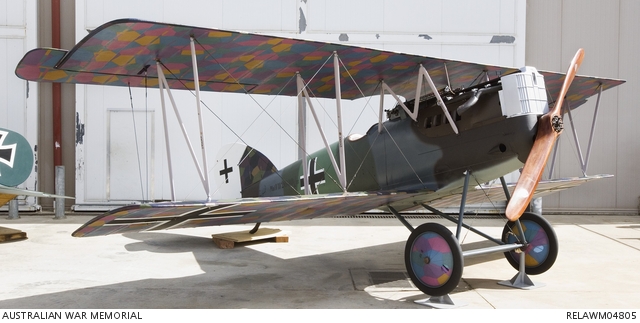 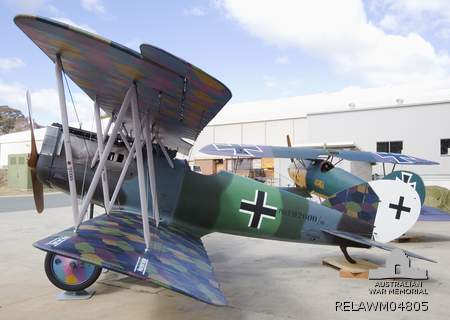 Pfalz D.XII single engine biplane scout/fighter aircraft, serial no. 2600/18. The fuselage is constructed from moulded plywood, and the wings/tail assembly is constructed from timber ply and strip section using timbers spars for strength. The entire airframe is fabric covered; the fuselage with a plain linen material which was then finished in camouflage paint. The wings were covered in printed five colour lozenge camouflage fabric finished with plain dope. The horizontal tail surface are believed to have been covered with five colour fabric on top and painted light blue below. The fin was covered in upper surface patter five colour lozenge, while the rudder was painted white.
The aircraft was originally fitted with a 180 horse power Mercedes D.IIIa engine, serial no. MN43065 which is held in storage.

The aircraft was received fitted with two MG08/16 machine guns; the port was number 9455 and the starboard gun was 9290. The propeller bears a silver decal showing a three ringed logo applied to the forward face of each blade. The decal is fragmentary, with the manufacturer's name no longer clearly legible; only "...ndorf Propellerwerke" remains. In its original form the decal would have read "Luckenwalde Propellerwerke Neindorf".

There are few known instances of contact between Australian airmen and Pfalz D.XIIs. This aircraft was given to Australia under terms of the Armistice that ended the First World War. The aircraft was sent from 2 Aircraft Salvage Depot in France to the UK by cross-channel steamer in late 1919, and was subsequently shipped to Australia. Its service history is unknown, but contemporary evidence suggests that the aircraft was regarded as 'used'. This indicates that the machine may have seen active use. 2600/18 was displayed in the Memorial from the 1940s until the 1960s. During this time it was mistakenly identified as a Pfalz which was forced down after combat with aircraft from 4 Squadron AFC in 1918.