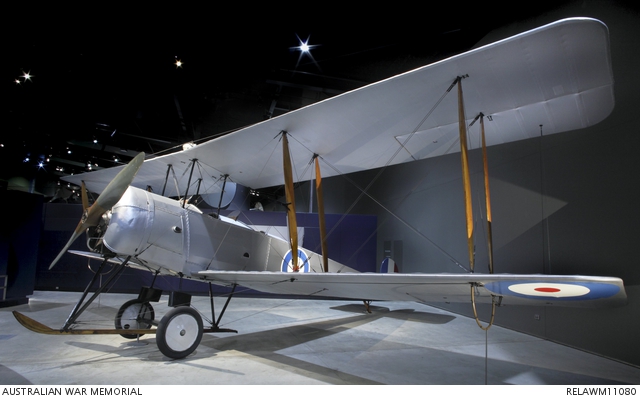 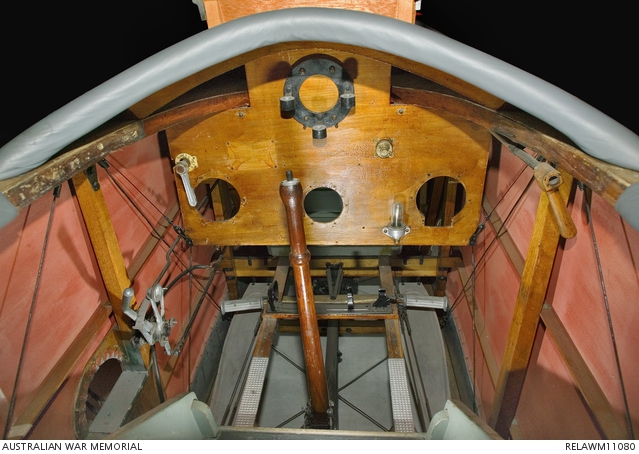 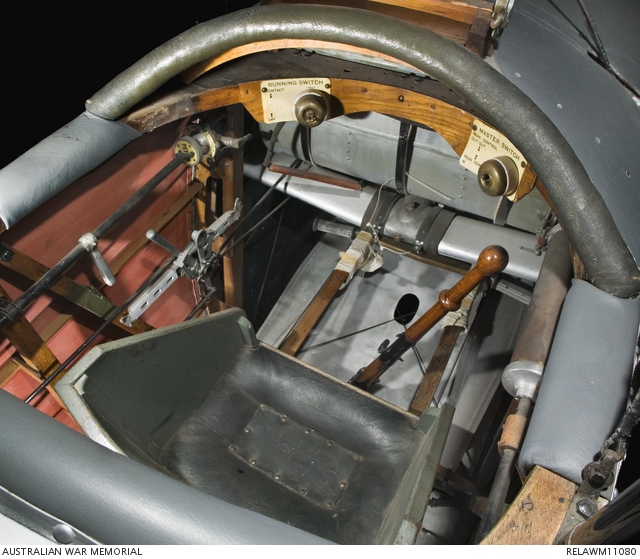 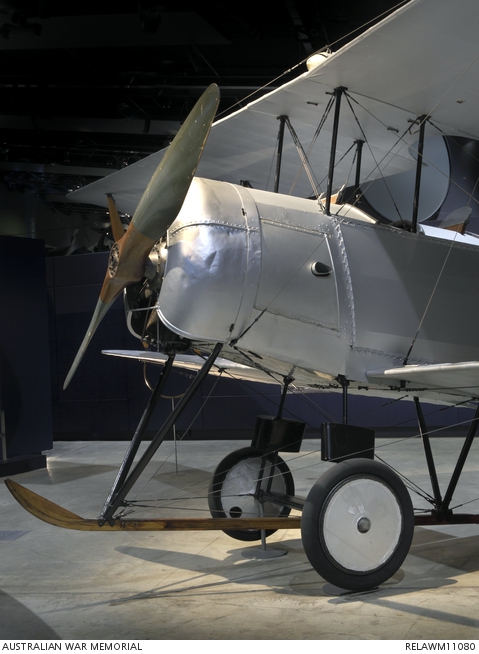 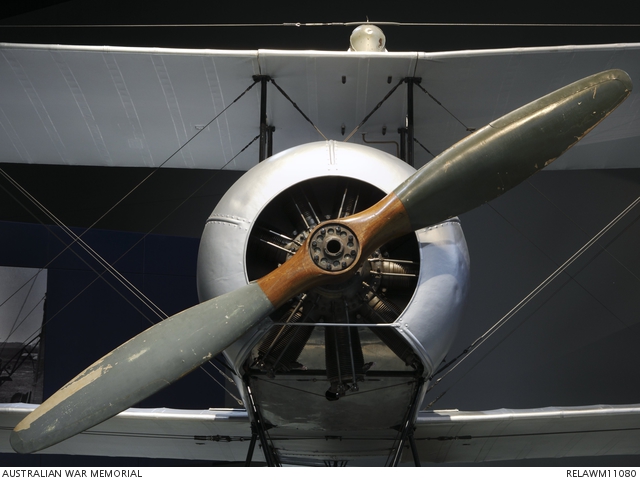 The Avro 504K is a two-place training biplane powered by a 130 hp Clerget 9B rotary engine. This aircraft was constructed by A V Roe and Company at Park Works, Manchester in the UK. In 1918 it was built to contract number 35a/2052/C.2330 of 10 August 1918, and is believed to have been completed in October. It's original British serial number was H2174. The airframe is primarily constructed of timber. The fuselage, wings and tail are fabric covered. The fuselage is a wire braced structure with four longerons. At the front is a universal engine mount, designed to accommodate Clerget, Le Rhone and Gnome engines. Inside the fuselage is a seating unit which supports two seats and associated dual controls for the aircraft. There are two instrument panels the forward one having a substantial range of instruments while the rear cockpit is provided with only a few basic instruments. A separate wing centre section is mounted above the fuselage; the upper wing panels attach to this. A small cylindrical gravity-feed fuel tank is mounted on top of the centre section. The lower panels are attached to steel brackets mounted on the longerons. Below the fuselage is attached an undercarriage structure, consisting of a steel tube frame with wire bracing. This frame supports a long timber landing skid and a pair of Palmer Cord aircraft wheels. The wheels have wire spokes and are fitted with circular fabric covers. At the rear of the fuselage is a tubular steel and plate steel bracket for mounting the rudder. Below the rear of the fuselage is attached a single timber landing skid fitted with a steel shoe and attached to a castoring mount. The rudder has a single vertical spar with attached ribs while the external edge is formed by a profiled steel tube. The wings are designed so that the upper and lower panels are interchangeable on each side. The wing structure consists of two milled solid spars supporting timber ribs. Ailerons are fitted to all four wing panels. The horizontal tail planes consist of a pair of interchangeable panels, one attached to the left hand side of the fuselage and one to the right. Each panel consists of a steel tube leading edge and two light spars built up from solid section timber and ply. Each panel attaches to the fuselage using an extension of the steel tube leading edge which plugs into the fuselage structure, while the rear of the panel is supported by a steel bracket which bolts to the fuselage at the rudder post. Attached to the rear of each panel is an elevator; the two elevators are interchangeable.

The Clerget engine has nine cylinders. It is a 9B model Type 2503L, Makers No. R2076, A No. 15205. It was manufactured under licence by Ruston Proctor and Co Ltd, of Lincoln. In this type of power plant the crankshaft is rigidly mounted to the aircraft, and the remainder of the engine is free to rotate around the crank shaft. The engine has two valves per cylinder, with valve push rods visible at the front of each cylinder. The two-bladed propeller is bolted to the front of the engine crank case, and rotates with it when the engine is in operation.

The Avro 504 design was first produced in 1913 and during the first months of the First World War was used in front-line service by the Royal Flying Corps and Royal Naval Air Service. The Avros were used for bombing and reconnaissance duties; one was modified to mount a machine gun and was responsible for the first air-to-air destruction of an opposing aircraft using this weapon.

By 1915 the type was being used as a trainer, and it was in this role that it served with the Australian Flying Corps (AFC). Four training squadrons - 5,6,7 and 8 Squadrons AFC were established and based in the UK with Avro 504s as their primary equipment. This Avro 504K was originally constructed with serial number H2174. The machine was part of a batch of twenty aircraft purchased by the Australian Flying Corps and allotted to Australia on 15 October 1918. After delivery to No. 6 Stores Depot at Ascot in the UK, H2174 was packed for shipping to Australia. It was loaded onto the SS Berrima on 14 December 1918 and arrived in Melbourne in February 1919. Note; the receipt of the machine precedes the arrival of Imperial Gift aircraft. By April the Avro had arrived at Point Cook and had been delivered to the Aeroplane Repair Section. On examination H2174, together with a number of other aircraft was found to have been damaged in transit. After repair the machine entered service with the Australian Air Corps in about August 1920, when it participated in the Second Peace Loan flights in eastern Australia. The aircraft was then stored and was subsequently allotted to 1 Flying Training School of the Australian Air Force at Richmond on 31 March 1921. The aircraft was still on charge when the RAAF was created later that year and continued in use until 1927. During this period it was allotted the RAAF serial number A3-4. In 1929 the Air Board of the RAAF contacted the Memorial with an offer to donate an example of the Avro 504K, on the basis that it would be a representative example of the type as used by the AFC during the First World War. In August A3-4 was received from No. 1 Aircraft Depot at Laverton, and delivered to the exhibition buildings in Melbourne. It was moved to Canberra and was part of the initial display in Aeroplane Hall in 1941 where it remained until 1955. The machine was then dismantled and moved to the Duntroon store where it remained until 1965 when it was loaned to Qantas. Qantas refurbished the aircraft, removing the Clerget engine and forward fuselage and substituting a complete engine and engine mount from an original Qantas Avro. The aircraft remained in this state until 1988 when it was again refurbished by Qantas apprentices and then returned to Canberra.