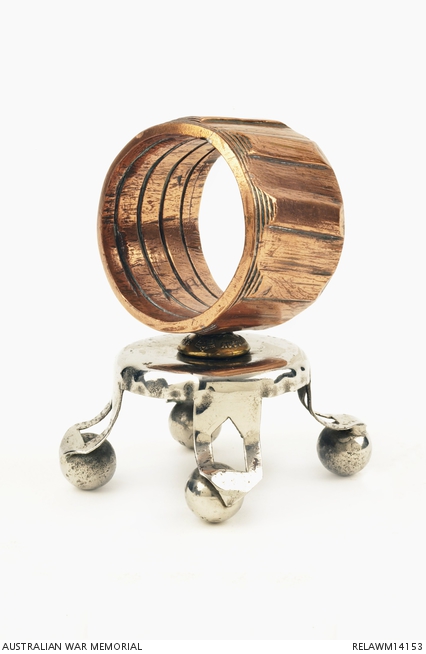 Trench art table napkin ring set on a stand. The ring is made from a section of copper driving band. It screws through a brass Australian Military Forces button on to a steel base with four ball feet.

This napkin ring is part of a collection of trench art made by 6756 Sapper Stanley Keith Pearl, a Tasmanian who served with 5 Field Compnay Engineers, AIF. He enlisted for service on 9 November 1915 and returned to Australia on 21 March 1919. Pearl subsequently moved to Canberra and was employed as a carpenter by the Australian War Memorial. He supplied the following information about the table napkin ring and stand, 'Made at Armentieres in January 1918. The ring is a piece of 6-inch "dud" shell found lying near Favreuil. The stand is a nose-cap of a Newton rifle-grenade and the feet are 18-pounder shrapnel pellets dropped short near Le Touquet.'