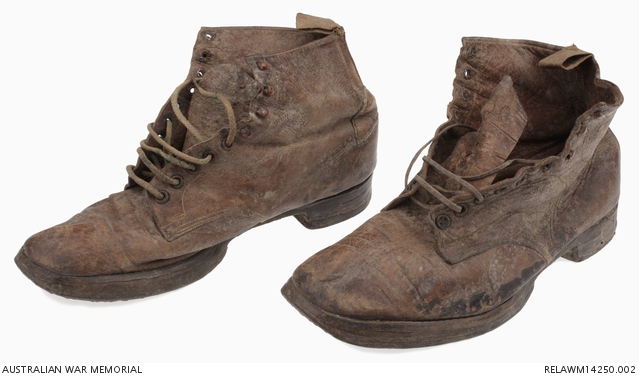 Australian Army issue tan leather boots without toe caps. Each boot has a short tongue made of soft beige coloured leather and a glued-in cork insole. The soles are of stitched leather, and are reinforced with rows of small iron staples. The heels are edged with a double row of iron staples to reduce wear, and have eleven iron nails to reinforce their attachment to the sole. The soles appear to have been replaced on several occasions. There are six pairs of 12 mm steel eyelets and four pairs of brass hooks for laces. The left boot has a leather cord lace and the right boot a woven cotton lace with metal ends.

Associated with the service of Lieutenant Reginald John Hunter, who was born in Brewarrina, NSW in 1893. Hunter was working as a linesman when the First World War began and was among the first to enlist for service in the Australian Naval and Military Expeditionary Force (ANMEF). He was allocated the service number 360 and was posted to C Company, 1 (Tropical) Battalion.

He embarked with the ANMEF from Sydney on 19 August aboard HMAT A35 Berrima. After a training period at Palm Island, the force proceeded to New Britain where after an initial landing early on 11 September, the waiting infantry went ashore on the afternoon. The following day, after re-embarking, the ANMEF landed at Rabaul and the Union Jack was raised over the town that afternoon. All armed resistance had ceased on New Britain by 17 September. Following the surrender of the German Forces, Hunter became part of the garrison based at Rabaul. He returned to Australia and was discharged from the ANMEF on 4 March 1915.

He enlisted for service in the AIF on 22 March 1915. He was allocated a new service number, 1211, and posted as a private to H Company, 19 Infantry Battalion. Hunter was promoted to corporal in mid March then lance sergeant at the end of the month. Hunter embarked with his unit from Sydney on 25 June aboard HMAT A40 Ceramic, arriving in Egypt in July. After a period of further training, the battalion embarked for service at Gallipoli in mid August.

Upon arrival, the battalion was thrown straight into the fighting for Hill 60, the last Australian offensive of the Gallipoli campaign. The battle ended on 29 August and from September, 19 Battalion primarily served around the Pope's Hill area. After withdrawing from Gallipoli on 19 December, the men of 19 Battalion returned to Egypt for training and to take on reinforcements.

They proceeded to France in 1916, where 19 Battalion were sent to the Nursery Sector near Armentieres to acclimatise to trench warfare on the Western Front. Hunter saw his first major action at Pozieres in late July and into August, before heading into a quieter sector in Belgium.

In December, Hunter was sent to gas school, then in January 1918 to musketry school. He returned to the battalion in February and took part in halting the German Spring Offensive near Villers Bretonneux in April.

On 5 June, 19 Battalion was in the front line near Morlancourt. The Germans launched a raid on the battalion's positions and Hunter was severely wounded in the head and shoulders by shrapnel from an exploding shell. He was evacuated to 20 Casualty Clearing Station where he died from his wounds later that day. Hunter was buried at Vignacourt British Cemetery.

This pair of boots was returned with Hunter's other personal effects to his Mother in 1918. Hunter's brother, Sergeant Hector Norman Hunter, was killed serving with 18 Battalion on Gallipoli on 22 August 1915. He has no known grave and is remembered on the Lone Pine Memorial.