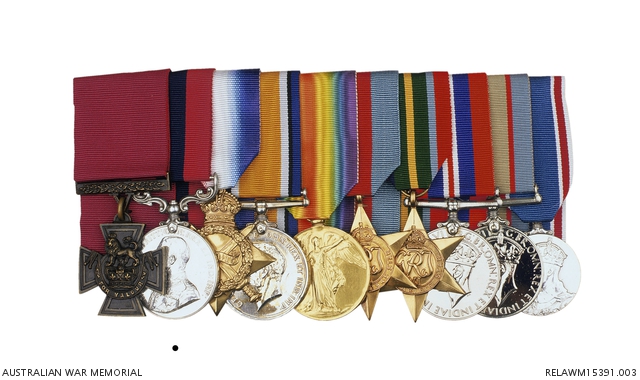 This Distinguished Service Medal (DCM) was awarded to Private Walter Ernest 'Wally' Brown. Brown was born to Sidney Francis and Agnes Mary (nee Carney) Brown in New Norfolk, Tasmania on 3 July 1895. Prior to the outbreak of the First World War, Wally worked as a grocer in New Norfolk before moving to Petersham in Sydney. He enlisted in the AIF at Liverpool on 26 July 1915 and was posted as a private (1689) to the 11th Reinforcements of 1 Light Horse Regiment (1LHR).

The unit embarked from Sydney on the SS Hawkes Bay on 23 October 1915. Brown joined 1LHR in Egypt on 14 January 1916 but soon became impatient to get to the front. Feigning the loss of his false teeth as an excuse to get to Cairo, he obtained a transfer to 20 Battalion (20Bn) reinforcements on 7 July. In August he sailed to England for training before proceeding to France in late September. He was finally taken on strength of 'A' company, 20Bn at St Omer on 8 August 1917. Before this he was briefly attached to 55Bn and then to 1 and 2 Australian Field Butcheries between November 1916 and August 1917.

During fighting around Passchendaele between 5 and 10 October, he was singled out for his work in tending to wounded under heavy fire and taking charge of his section when his sergeant was killed. For his actions during the fighting, Brown was awarded the DCM. The recommendation for the award reads:

'During operations 5 - 10/10/17 in front of PASSCHENDAELE. On night 5th /6th October under very heavy shell fire this N.C.O. tended the wounded of the Company. On morning of 9th October he displayed great coolness and dash, taking charge of his section after its N.C.O. had become a casualty. This information was not available when recommendations for immediate rewards were called for with reference to these operations. Since then, L/CPL. BROWN has done good work and shown consistent devotion to duty while in the line.'

Brown was promoted to corporal on 7 April 1918. On 6 July, while his battalion was assisting in consolidating the gains made during the Battle of Hamel, Brown single handedly captured a German machine gun post including 13 enemy troops. For his actions he was awarded a Victoria Cross. He was promoted to sergeant on 13 September. In October Brown was granted leave to accompany other VC winners to Australia to help with recruiting. Before to leaving England, however, he had a change of heart and applied to have the leave cancelled so that he could return to his battalion in France. He rejoined his unit on 15 November.

Between April and August 1919 he was granted further leave to undertake a cinematic course in London. In August he rejoined his unit in France. Brown returned to Australia aboard the 'Nestor' on 15 December and was discharged from the AIF on 15 February 1920.

Following his return to Australia he lived in Sydney before taking a position with the NSW Water Conservation and Irrigation Commission in Leeton in 1930. He married Maude Dillon on 4 June 1932 at Bexley complete with a guard of honour comprising eight VC winners. At Wagga Wagga, on 21 June 1940 following the outbreak of the Second World War, he re-enlisted (NX35492), giving his date of birth as 1900. His age was soon discovered and he was posted to 8Bn as corporal and promoted to lance sergeant on 1 July.

In November he transferred to 2/15 Field Regiment and later reverted to gunner at his own request. The regiment moved to Malaya in August 1941 and was in Singapore when it fell to the Japanese on 15 February 1942. Brown was last seen in the hours prior to the capitulation disappearing toward the enemy lines saying 'No surrender for me.' He was posted as missing on 16 February 1942 and presumed dead on the 28th. His body was never recovered. His name is commemorated on the Singapore Memorial, 22 kilometres north of the city of Singapore. He was survived by his wife and two children although their seven year old son died of meningitis the following year.