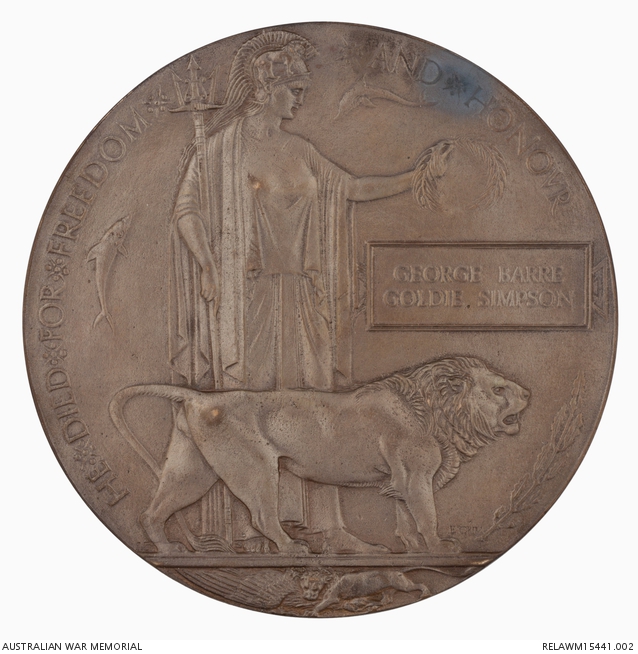 Bronze next of kin plaque, showing on the obverse, Britannia holding a laurel wreath, the British lion, dolphins, a spray of oak leaves and the words 'HE DIED FOR FREEDOM AND HONOUR' around the edge. Beneath the main figures, the British lion defeats the German eagle. The initials 'ECP', for the designer Edward Carter Preston appear above the lion's right forepaw. A raised rectangle above the lion's head bears the name 'GEORGE BARRE GOLDIE SIMPSON'. The plaque is contained in its original cardboard sleeve, and is retains the original heavy white paper wrapping in which it was issued. The paper bears a typewritten address '302468 866 L/Cpl. G.B.G. Simpson, 4/Bn./ A.H. Simson, Esq., Hunters Hill SYDNEY N.S.W.'.

George Barre Goldie Simpson was born in Sydney, NSW in 1887. Educated at Sydney Grammar School and Cambridge University in England, he was working as an overseer when he enlisted in the AIF on 17 August 1914.

Assigned as a private with the service number 866, to A Company, 4 Battalion, he left Sydney for Egypt with his unit on 20 October 1914, aboard HMAT A14 Euripides. Also sailing in the Euripides was his brother, Adam James Simpson, a lieutenant in C Company of the same battalion.

After training in Egypt the battalion left Alexandria on 5 April 1915 on the transport Lake Michigan. The battalion landed on Gallipoli on 25 April as part of the second and third waves. Simpson received 'slight' gunshot wounds to both arms on 30 April and was evacuated to Egypt for medical treatment. He returned to Gallipoli on 30 May. In July he was promoted to lance corporal.

Simpson was killed in action between 6 and 9 August, during the attack on Lone Pine. He was buried on 10 August at Johnston's Jolly. When a formal cemetery was established on the site after the war the exact location of his grave could not be established. A memorial headstone, at the perimeter of the cemetery states that he is believed to buried the Johnston's Jolly cemetery.

Simpson's brother, later a lieutenant colonel, survived the war. This commemorative plaque was issued to Simpson's mother, Marion. His father, nominated as his next-of-kin, had died in 1918 and Mrs Simpson had to provide evidence of her husband's death before the plaque could be issued to her.