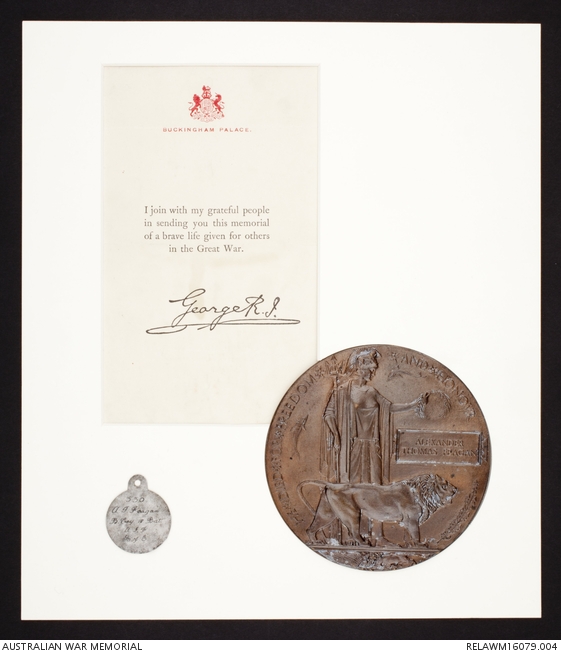 Bronze next of kin plaque, showing on the obverse, Britannia holding a laurel wreath, the British lion, dolphins, a spray of oak leaves and the words 'HE DIED FOR FREEDOM AND HONOUR' around the edge. Beneath the main figures, the British lion defeats the German eagle. The initials 'ECP', for the designer Edward Carter Preston appear above the lion's right forepaw. A raised rectangle above the lion's head bears the name 'ALEXANDER THOMAS FEAGAN'.

Alexander Thomas Feagan was born at Bungendore, New South Wales. He was working as a wool classer in Goulburn when he enlisted in the AIF on 27 February 1915, at the age of 32.

After initial training Feagan was assigned as private, with the service number 530, to B Company, 18 Battalion. The battalion sailed from Sydney for service on Gallipoli on 25 June, aboard the transport HMAT A40 Ceramic. After a brief period of training in Egypt, the battalion landed on Gallipoli on 20 August. A day later it went into the line at Hill 60. In the fighting there between 21 and 29 August half its menn became casualties. Feagan was one of those who died, on 27 August. His body was not recovered and he has no known grave. His name is listed on the Lone Pine Memorial.

His elder brother, 6258 Private Sydney Richard Feagan, also served in the war, which he survived, with 2 Battalion, AIF.