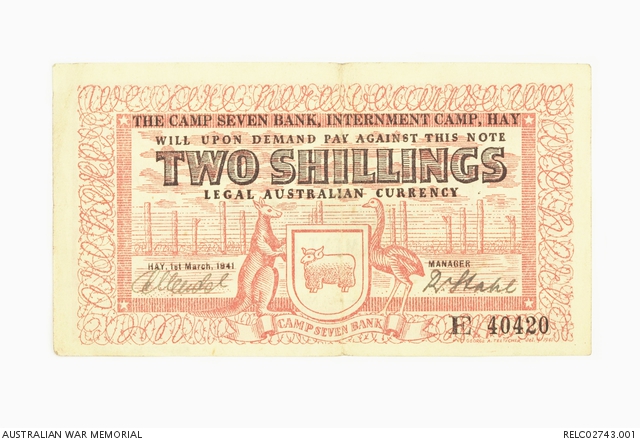 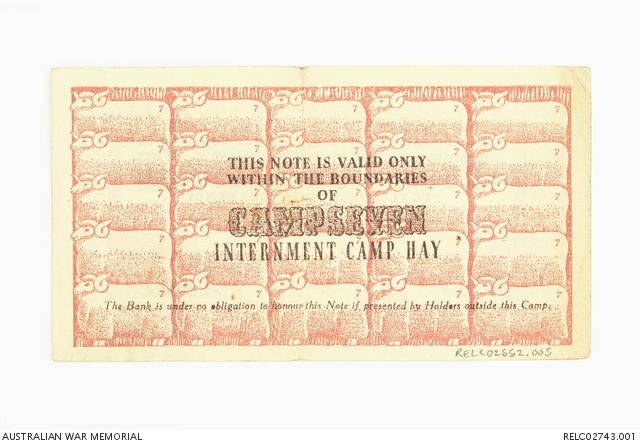 Paper currency note printed in red and black. Depicted on the obverse is a kangaroo and emu coat of arms with a merino sheep on the shield, all in front of a barbed wire fence. A ribbon legend under the shield reads "CAMP SEVEN BANK", while the words "HAY, 1st March, 1941" appear to the left of the kangaroo, and the word "MANAGER" to the right of the emu. Under each of these words appears a signature - three combinations were possible, (Mendel and Stahl; Eppenstein and Stahl; Robinson and Stahl) and Stahl's name always appears under "Manager" - he was an interred German banker. The scene is bordered by a barbed wire decoration. The reverse side is decorated with 25 sheep (representing the Camp's 25 huts), each with a 7 on its back, and is overprinted with the words "THIS NOTE IS VALID ONLY / WITHIN THE BOUNDARIES / OF / CAMPSEVEN / INTERNMENT CAMP HAY. The Bank is under no obligation to honour this Note if presented by Holder outside this Camp." A number of hidden names appear within the design of the note: Camp leader, W. Eppenstein's name is written within the fleece of the sheep on the shield, while the name of each hut leader is included within the fleece of the 25 sheep on the reverse. The obverse barbed wire decoration forms the words "we are here because we are here because we are here". The designer's details, "George A . Teltscher del 1941" also appears in the bottom right of the obverse.

In 1941-42, three internment camps were built 2km from the township of Hay. Each camp held 1000 internees from Italy and Germany. The Allied forces had detained these civilians because they were perceived as security risks to the European war effort. Despite early newspaper reports that the internees of Hay were dangerous, guards described their detainees as "well educated and anti-Nazi". Most were intellectuals detained as a matter of precaution and "national security". (Information from www.csu.edu.au). Some of the internees were German-Jewish refugees who had sailed from Britain to Sydney on HMT Dunera in September 1940. The donor was a German Jewish internee at the camp.