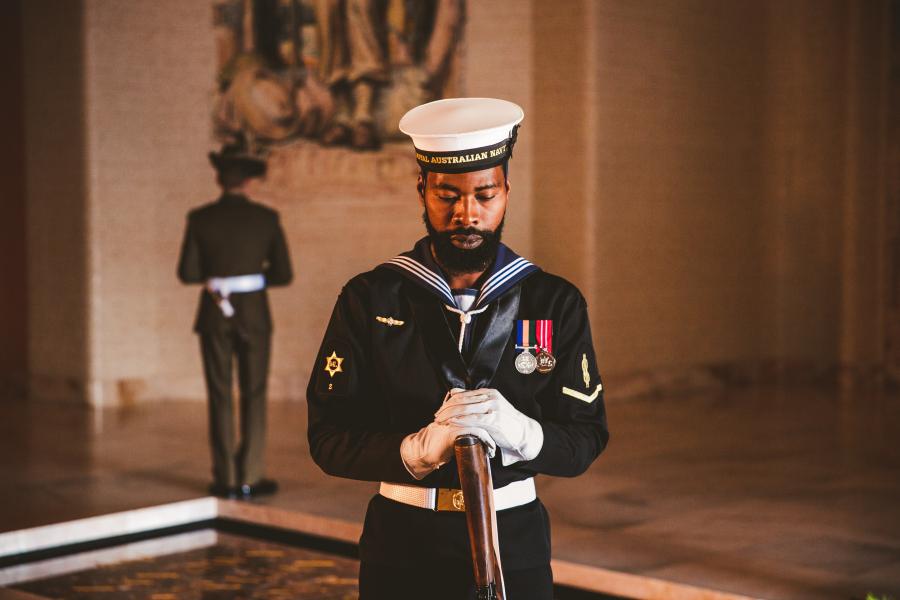 What is Anzac Day?

Anzac Day, 25 April, is one of Australia’s most important national occasions. It marks the anniversary of the first major military action fought by Australian and New Zealand forces during the First World War.

What does ANZAC stand for?

ANZAC stands for Australian and New Zealand Army Corps. The soldiers in those forces quickly became known as Anzacs, and the pride they took in that name endures to this day.

When war broke out in 1914 Australia had been a federated nation for only 13 years, and its government was eager to establish a reputation among the nations of the world. When Britain declared war in August 1914 Australia was automatically placed on the side of the Commonwealth. In 1915 Australian and New Zealand soldiers formed part of the expedition that set out to capture the Gallipoli peninsula in order to open the Dardanelles to the allied navies. The ultimate objective was to capture Constantinople (now Istanbul), the capital of the Ottoman Empire, an ally of Germany.

A view looking aft of lifeboat carrying unidentified men of the Australian 1st Divisional Signal Company as they are towed towards Anzac Cove on the day of the landing.

The Australian and New Zealand forces landed on Gallipoli on 25 April, meeting fierce resistance from the Ottoman Turkish defenders. What had been planned as a bold stroke to knock Turkey out of the war quickly became a stalemate, and the campaign dragged on for eight months. At the end of 1915 the allied forces were evacuated from the peninsula, with both sides having suffered heavy casualties and endured great hardships. More than 8,000 Australian soldiers had died in the campaign. Gallipoli had a profound impact on Australians at home, and 25 April soon became the day on which Australians remembered the sacrifice of those who died in the war.

Although the Gallipoli campaign failed in its military objectives, the actions of Australian and New Zealand forces during the campaign left a powerful legacy. What became known as the “Anzac legend” became an important part of the identity of both nations, shaping the ways in which they viewed both their past and their future.

In 1916 the first Anzac Day commemorations were held on 25 April. The day was marked by a wide variety of ceremonies and services across Australia, a march through London, and a sports day in the Australian camp in Egypt. In London more than 2,000 Australian and New Zealand troops marched through the streets; a London newspaper headline dubbed them “the knights of Gallipoli”. Marches were held all over Australia; in the Sydney march convoys of cars carried soldiers wounded on Gallipoli and their nurses. For the remaining years of the war Anzac Day was used as an occasion for patriotic rallies and recruiting campaigns, and parades of serving members of the AIF were held in most cities. 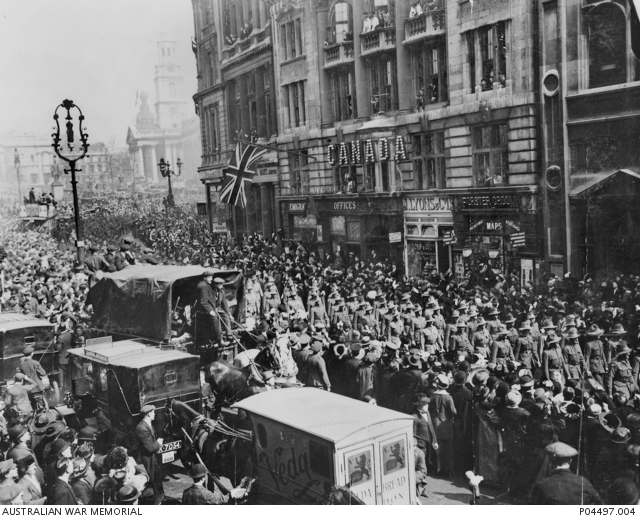 During the 1920s Anzac Day became established as a national day of commemoration for the more than 60,000 Australians who had died during the war. In 1927, for the first time, every state observed some form of public holiday on Anzac Day. By the mid-1930s all the rituals we now associate with the day – dawn vigils, marches, memorial services, reunions, two-up games – were firmly established as part of Anzac Day culture.

Later, Anzac Day also served to commemorate the lives of Australians who died in the Second World War, and in subsequent years the meaning of the day has been further broadened to include those who lost their lives in all the military and peacekeeping operations in which Australia has been involved.

What does it mean today?

Australians recognise 25 April as a day of national remembrance, which takes two forms. Commemorative services are held across the nation at dawn – the time of the original landing, while later in the day, former servicemen and servicewomen meet to take part in marches through the country’s major cities and in many smaller centres. Commemorative ceremonies are more formal, and are held at war memorials around the country. In these ways, Anzac Day is a time at which Australians reflect on the many different meanings of war. 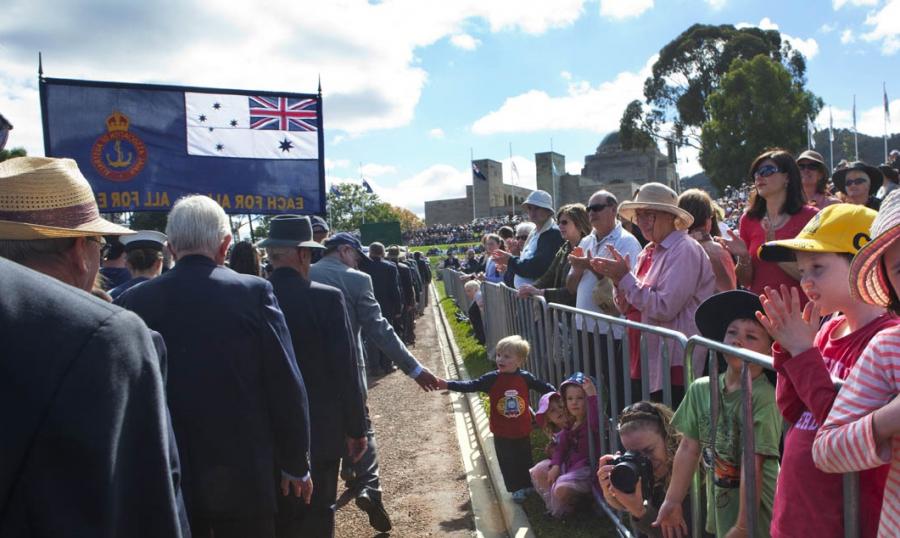 It is often suggested that the Dawn Service observed on Anzac Day has its origins in a military routine still followed by the Australian Army. The half-light of dawn was one of the times favoured for launching an attack. Soldiers in defensive positions were woken in the dark before dawn, so by the time first light crept across the battlefield they were awake, alert, and manning their weapons; this is still known as the “stand-to”. As dusk is equally favourable for battle, the stand-to was repeated at sunset.

After the First World War, returned soldiers sought the comradeship they had felt in those quiet, peaceful moments before dawn. A dawn vigil became the basis for commemoration in several places after the war. It is difficult to say when the first dawn services were held, as many were instigated by veterans, clergymen, and civilians from all over the country. A dawn requiem mass was held at Albany as early as 1918, and a wreathlaying and commemoration took place at dawn in Toowoomba the following year. In 1927 a group of returned men returning at dawn from an Anzac Day function held the night before came upon an elderly woman laying flowers at the as yet unfinished Sydney Cenotaph. Joining her in this private remembrance, the men later resolved to institute a dawn service the following year. Some 150 people gathered at the Cenotaph in 1928 for a wreathlaying and two minutes’ silence. This is generally regarded as the beginning of organised dawn services. Over the years the ceremonies have developed into their modern forms and have seen an increased association with the dawn landings of 25 April 1915. 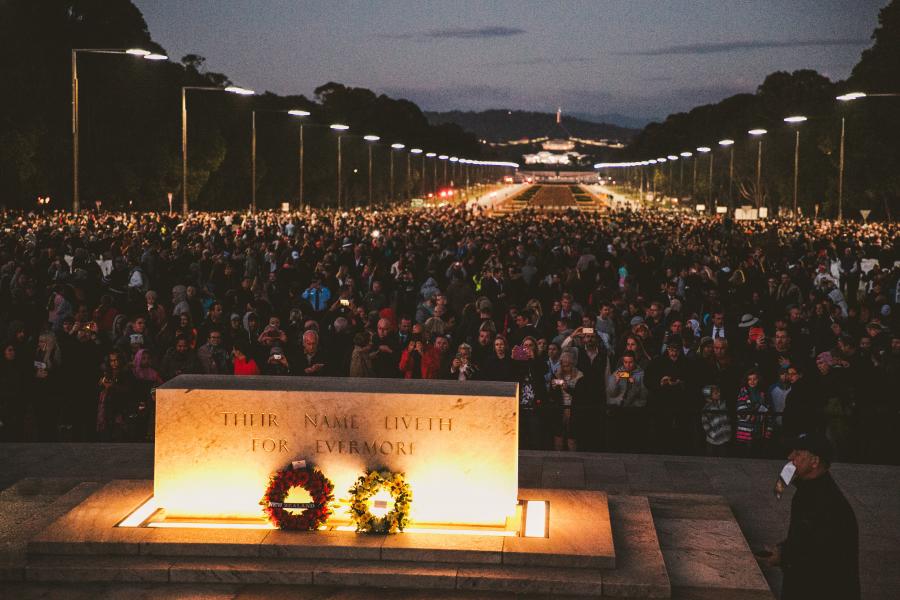 At the Australian War Memorial the National Ceremony begins with the traditional order of service, including the veteran’s march, Commemorative Address, laying of wreaths, hymns, the sounding of the Last Post, and observance of one minute’s silence, and the national anthems of New Zealand and Australia.

Back to information about Anzac Day
Anzac Day