Robert Deckhardt was born in 1888 in the town of Holm, south-east of Lublin. While today it is part of Poland, Lublin was under Russian rule when Deckhardt was born, and so he was a Russian subject. He made his way to Australia on Natal Transport, and deserted the ship at Bunbury in Western Australia in November 1912. He later travelled to Queensland where he worked as a marine fireman.

On 6 November 1915 Robert enlisted in the Australian Imperial Force (AIF) at Rockhampton, Queensland. He was posted to the newly formed 42nd Battalion and several months later embarked for Southampton aboard HMAT Borda.

After completing training, the battalion was sent to France in November 1916, and entered the front line for the first time on 23 December. Winter had set in, and it was one of the harshest France had ever recorded. The 42nd Battalion spent most of the winter rotating in and out of the front line, living in the trenches or back lines in extreme cold, mud, and snow. In early March 1917, Robert was admitted to hospital with a septic foot. He was able to return to his unit at the front line less than a week later. In the months that followed, the 42nd Battalion participated in major battles at Messines in June, and Warneton in July. On 5 August Robert was promoted to lance corporal. 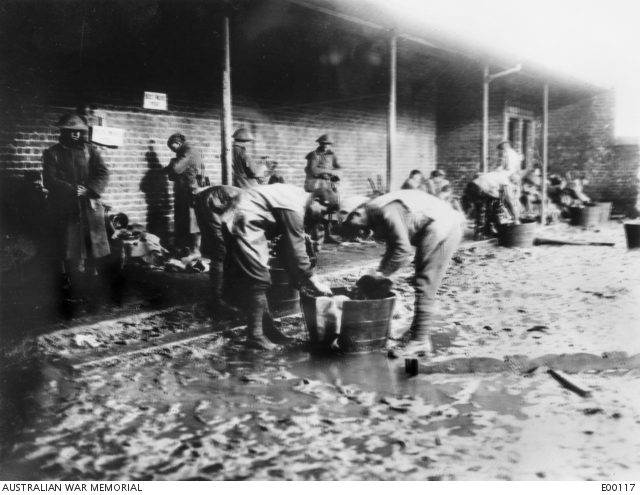 Members of the 42nd battalion washing their boots, France, 1917. Robert Deckhardt is standing along the back wall, second from the left.

During his time with the AIF Robert became good friends with Corporal William James Corry, a farmer from Gympie, Queensland. Robert told William that his parents had died before he left Russia, and in July 1917, he made out a will leaving everything to his friend. In September 1917 William was repatriated to Australia after he fractured his left arm.

Just over a month after William was sent home, Robert was killed in action at the battle of Passchendaele in Belgium, on 12 October 1917. This battle proved particularly costly for the 42nd Battalion as over one-third of its men became casualties, principally from trench foot and German gas attacks.

It took longer than expected to send Robert's effects – his savings, pocketbook, photos, letters, three books, a bible, and a candlestick – to William. It was eventually discovered that William’s real name was William Joseph Jew. William had enlisted in the AIF under the assumed name "Corry" for unknown reasons. After William’s signed affidavit and two other witnesses had substantiated his identity, Robert's belongings were released.

Robert's body was never recovered. His name appears on the Menin Gate Memorial in Ypres, Belgium, and on the First World War Roll of Honour at the Australian War Memorial.