Major government projects bring prosperity for Australia. But these benefits must be weighed carefully against possible impacts on communities, the environment, heritage, and other matters. There are three stages of approvals for a government capital project to be delivered in the ACT: 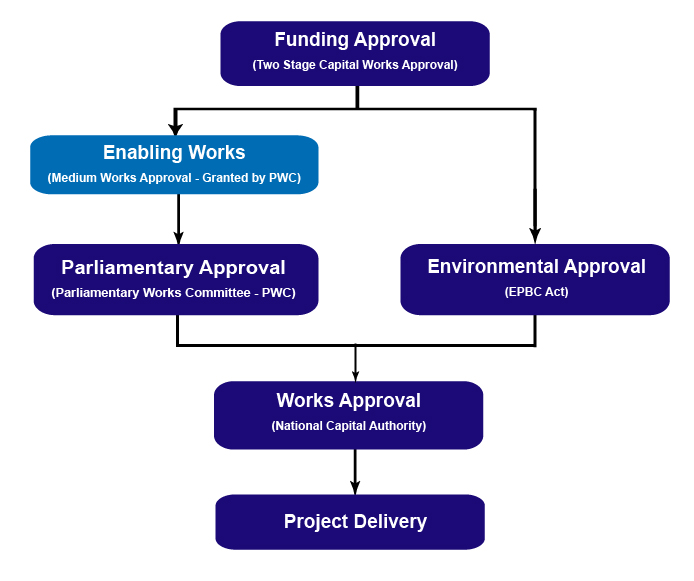 We secured funding approval for our proposed Development Project in 2018 with bipartisan parliamentary support. Through the $498.7 million in funding allocated over nine years, the Memorial will better recognise the contemporary service of our country’s veterans now and into the future.

In March 2022 the Government provided $50 million through the additional estimates process, to help offset the significant and unprecedented market cost movement resulting from the impacts of inflation and global supply chain issues which continue to put pressure on construction costs.

The Memorial had sought and received the necessary approvals for its enabling works from both the Parliamentary Works Committee, which approved a ‘Medium Works Approval’ in April 2019 relating to these works, and planning approvals from the National Capital Authority (NCA).

Enabling works are common practice in major construction projects, and its approvals are outside the three stages of approval for the overall construction and development project. In line with project management best practice, the Memorial undertook a risk review of its program in 2019. This demonstrated that delivering elements of the Project as enabling and early-works packages would offer a number of advantages, including: minimising the impact on the visitor experience, reducing project time and costs, and enabling smaller businesses to work on the project.

As the National Capital Authority considers the Memorial’s ‘Works Approval’ applications, they will progressively be listed on their website. Please note that only the last six months of the NCA’s granted approvals are displayed.

On 10 December 2020, the Hon Sussan Ley MP, Minister for the Environment, approved our project works under the Environment Protection and Biodiversity Conservation Act 1999 (EPBC Act). We welcomed this approval as the first required to further progress the development.

On 14 November 2019, the Memorial referred its project to the Department of Agriculture, Water and Environment (DAWE) for consideration under the Environment Protection and Biodiversity Conservation Act 1999 (EPBC Act). The referral documentation initially covered the new Anzac Hall and Glazed Link, and the new Southern Entrance, with a variation later submitted to include the C.E.W Bean Building extension and refurbishment, the C.E.W Bean Research Centre, and Public Realm improvement works. The variation was accepted by DAWE, which has helped to ensure the public and the Department were able to consider and comment on the impact of the entirety of the project through one process.

On 18 December 2019 the project was declared a ‘controlled action’, requiring an assessment decision under the EPBC Act.

During the initial referral process we conducted extensive public consultation for the development of our EPBC Preliminary Documentation.

These two consultation programs resulted in feedback regarding the project from more than 1,000 Australians. This feedback was used to inform both the assessment documentation and further development of our project plans.

As the project was declared a ‘controlled action’, a second phase of public consultation took place in July 2020 offering a four week period for the public to comment the environmental and heritage impacts of our plans. During this time the Memorial continued to engage with DAWE and other government agencies on heritage matters, to undertake detailed design refinement. This second public consultation phase 167 public submissions were received.

Both the public comments and advice from DAWE greatly contributed to the Memorial’s Final Preliminary Documentation. Changes included more than 50 updates, clarifications or changes to project documentation and supporting attachments. Although the core project proposal remains largely unchanged, considerable work has been undertaken to reduce heritage impacts identified through this process. This is reflected in substantial design detail changes to the proposed New Anzac Hall, Glazed Link and Oculus elements in particular.

More than 35 formal commitments relating to the project have been put forth by the Memorial to provide assurance to the community that it will carefully manage the heritage impacts of the project and continue to offer meaningful community engagement throughout future project activity – including exhibition content - if all relevant approvals are granted.

The Final Preliminary Documentation is now available online. For people whom English is second language, who are vision impaired, or who otherwise require assistance to access the documents, please contact the project team on (02) 6243 4211, or email: development@awm.gov.au.

On 25 February 2021, the Australian Parliament processed the expediency motion for the Memorial’s Parliamentary Works Committee (PWC) Major Works Approval. Following this motion, the Development Project received full Parliamentary approval to be delivered. The project now moves through to the works approval stage managed by the Government through the National Capital Authority.

As part of the standard approval process our development project was referred to the Parliamentary Standing Committee on Public Works on 30 April 2020. This referral process included an additional public consultation period conducted via the Committees website. Submissions and participation in this process closed on 17 June 2020.

The Committee examined the development as a major government project. It reviewed the purpose, scope and need for the proposed works as well as well as the cost effectiveness, public value and impact on local communities.

Both Parliamentary and Environmental approvals are required to progress to the works approval process under the National Capital Authority.

On 24 November 2021, the NCA approved the Memorial’s three Main Works packages for the Development Project. This means the project has now secured all necessary approvals to proceed with delivering the new Southern Entrance, the CEW Bean Building extension, and the new Anzac Hall. The Memorial will work with the NCA to comply with conditions noted in their decision.

The final approval was granted following 6 weeks of public consultation, from 31 July – 10 September 2021, hosted by the National Capital Authority offering opportunity for the public to provide feedback on the architectural designs of the project plans.

More information on the NCA approval is available on the NCA’s website. Public submissions - that included consent to publish - have been uploaded to the NCA website here.

On Monday 7 June 2021, the Memorial’s Early Works package for the development was approved, including: excavation works, services relocation, temporary hoardings, tree removals and the demolition of Anzac Hall. The decision followed a period of public consultation which closed on 30 April 2021.

Visit the NCA website to view details of the Early Works consultation process, to review submission documentation, and to access the NCA’s official Consultation Report.