Limited edition print: 'Always beside you' by Greg Wilson 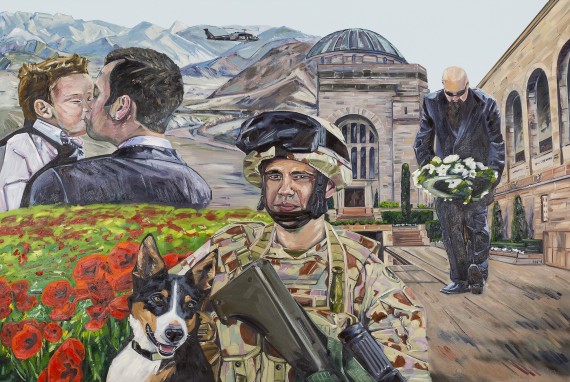 Artist Greg Wilson and the Australian War Memorial are generously donating the proceeds of these limited edition prints to the charity Soldier On.

So touched by a chance meeting with Sapper Smith’s father, who was attending a Last Post Ceremony (held at the Australian War Memorial) in honour of his son, that Wilson was inspired to commemorate the life and death of Sapper Smith in this striking artwork entitled Always beside you.

The painting depicts Smith as a devoted father, a cherished son, and highlights the bond between Smith and his dog “Herbie”, a steadfast comrade until their last moments together.

Sapper Darren Smith and his explosive detection dog "Herbie" were deployed to Afghanistan with Mentoring Task Force 1 in March 2010. On the morning of 7 June 2010, while conducting a regular foot patrol in and around the village of Sorkh, Sapper Smith and “Herbie” triggered an Improvised Explosive Device (IED) hidden in a creek bed. The blast killed “Herbie” immediately and mortally wounded both Sapper Smith and Sapper Jacob Moreland.

Prints are sold unframed and measure 75 x 100 cm. There are a limited number of 100 available.

Each print comes with a certificate of authenticity, uniquely numbered, and signed by the artist Greg Wilson and the Director of the Memorial Brendan Nelson.

Please note: no discounts apply to this product.