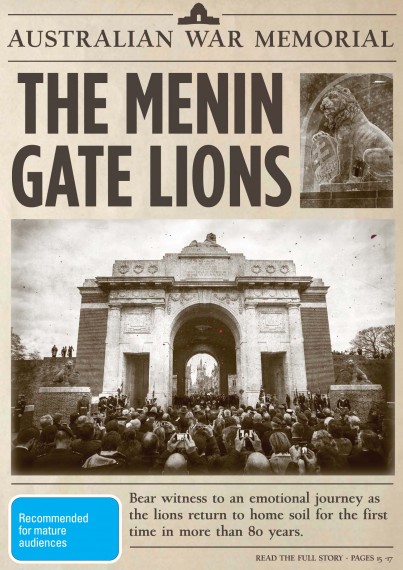 Bear witness to an emotional journey as the lions return to home soil for the first time in more than 80 years.

In the mud and horror of the Third Battle of Ypres - an offensive now known as "Passchendaele" - Australian forces incurred more than 38,000 casualties in just eight weeks of fighting. It was one of the most costly campaigns of the First World War.

Since then, through the inconsolable grief and mourning of a generation of Australians, we have been inextricably linked with the nation of Belgium.

As the allied soldiers marched into battle in Belgium they passed two iconic stone statues - the Menin Gate lions - which stood sentinel as the city of Ypres was ruined by German artillery fire.

The lions were the final reminder of civilised existence, and the last thing all too many saw before they faced death, adversity, and circumstances beyond our comprehension.

Broken and scarred, the lions were later recovered from the rubble, and in 1936 were presented to the Australian government as a token of friendship and an acknowledgement of Australia's sacrifice in the region during the war.

Since 1991 the lions have been displayed at the entrance of the Australian War Memorial in Canberra. As part of the centenary of the Great War, and in recognition of the deep bonds forged between Australia and Belgium, the lions were delivered on loan by the Memorial back to the Menin Gate in the city of Ieper (Ypres), Belgium.

This feature-length documentary, produced by renowned broadcaster Max Uechtritz and narrated by Jack Thompson, illustrates the emotional impact on the people of both Belgium and Australia as the lions are returned to home soil for the first time in more than 80 years.