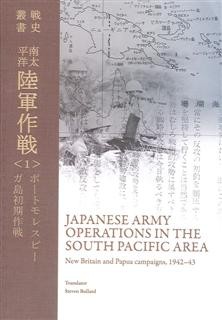 New Britain and Papua campaigns, 1942-43. The first published translation of sections of the 'War history series' (Senshi sosho), the official history of Japanese involvement in the Second World War. The text covers the invasion of Rabaul in January 1942, the battles along the Kokoda Trail and at Milne Bay, and the destruction of the Japanese forces at Buna, Gona and Giruwa in January 1943.

The book includes text in Japanese and also the English translation.