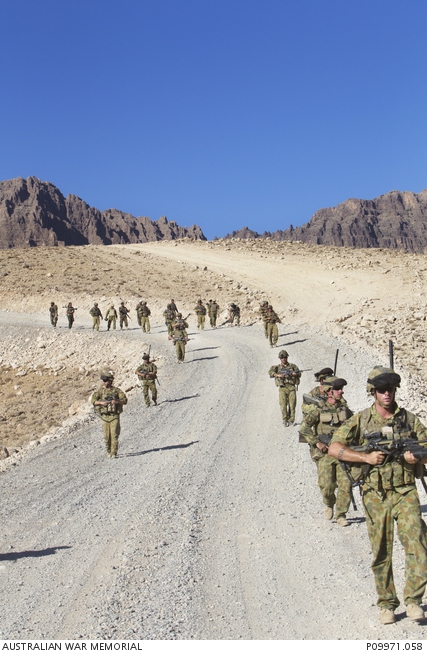 This exhibition is currently closed. We will continue to share this story and those of other contemporary conflicts, when we open our new galleries as part of the Memorial Development Project.

Half a world away Australians are serving their country by building another. The war in Afghanistan and operations in the Middle East have engaged thousands of Australian men and women, both military and civilian, for over a decade.

They have built schools, roads, and hospitals. They have mentored the fledgling army of a new, democratic nation. They have engaged in fierce fighting and have demonstrated bravery and dedication beyond compare.

On 11 September 2001, Australians felt outrage at al Qaeda’s attack on the United States. A year later, the devastating Bali bombings in Indonesia again brought home the threat of global terrorism. Some of those who planned the bombings had trained in Afghanistan. Australians were killed in both attacks.

Australia joined the United States and its allies across the world to take a stand against this threat. Afghanistan, a land contested by armies for centuries, became the focus of international efforts to contain terrorism.

The mission has evolved over the past decade in what is called the Middle East Area of Operations (MEAO). From counter-insurgency, through reconstruction, to mentoring, Australians have been working to create a democratic and stable Afghan nation. This mission aims to assist the people of Afghanistan, but also to promote the security of the region, diminish the influence of terrorist groups, and create a safer global environment.

Afghanistan and the Middle East are now indelibly linked to Australia’s national story.

Australia’s mission is clear: to combat international terrorism, to help stabilise Afghanistan, and to support Australia’s international alliances. Yet a mission statement cannot capture the challenges, the successes, and the comradeship of the Australian men and women who pursue it. Nor the joys and heartbreaks, or the loneliness and the dedication of those who wait at home.

Some of these experiences, set against the powerful imagery of a modern war, are told in this exhibition. Over time, the display will change and evolve as more veterans share their stories.

The opening speech at the exhibition launch, given by General David Hurley AC DSC, Chief of the Defence Force, on 6 August 2013.

This exhibition is proudly supported by Boeing.