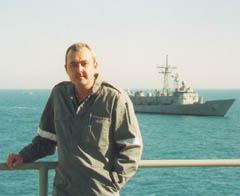 In February 2002 the Australian War Memorial, continuing a tradition extending back to the First World War, appointed Peter Churcher as an official war artist for the war against terrorism. Sent to the Persian Gulf and Diego Garcia, he recorded the people and operations of the Royal Australian Navy (RAN) and Royal Australian Air Force (RAAF).

During his commission, Churcher produced many oil paintings and drawings, works characterised by spontaneity, a refreshing directness, and a fascination with the figurative. For the first three weeks, he experienced life with the RAN on board the HMAS Kanimbla and Adelaide. His images range from the claustrophobic engine room to the view from the ship's bow, from naval boarding parties bound for smugglers' vessels to moments of quiet reflection and sleep. Churcher then spent time with the RAAF on the island base of Diego Garcia documenting service life in the tropical environment as well as Australian and American aircraft.

Peter Churcher's works capture the day-to-day experiences of today's defence force personnel, while harking back to older art traditions and styles. His images provide a valuable insight into the nature of modern warfare.