In February 1942, an invasion of the Australian continent appeared imminent. Just ten weeks after Japan’s whirlwind invasion of South-East Asia, Australia itself became the target of air and sea attacks.

Whether fighting on the front line in northern Australia, living on the land, or experiencing austerity measures in the cities, Australians found a unity of purpose they had not known before. They responded to the attacks and the threat of invasion in their own ways, depending on where they lived and what jobs they did. Civilians took air raid precautions like digging shelters, they trained for civil defence, learned first aid, budgeted their rations and worked in vital industries. Those in uniform crewed anti-aircraft artillery, staffed the lines of communication and supply, or searched for mines or submarines. All Australians were touched by the war.

Attacks on Australia continued into 1943 and it was not until September that year that Prime Minister John Curtin finally announced to his cabinet that the danger of invasion had passed. There was still a victory to be won, but that was elsewhere and Australia was no longer threatened.

The Menzies government committed Australia to war against Nazi Germany in September 1939. By February 1942 Australia had raised a four-division expeditionary force, the second Australian Imperial Force (AIF). Three of these – the 6th , 7th and 9th Divisions – were serving in North Africa or the Middle East. Most of the men in the 8th were killed or captured in Asia. Many of the Royal Australian Navy’s (RAN) warships were deployed in the Mediterranean Sea or Indian Ocean, and most of Australia’s airmen were serving in the European theatre or training in Africa or North America.

Australia was barely equipped to defend itself. However, it did have several militia divisions that would be used, and local production of war material had commenced.

Japanese attacks in the Pacific

Just after midnight on 8 December 1941 Japanese troops began the invasion of British Malaya. Hours later another Japanese force attacked the US Pacific Fleet at Pearl Harbor, Hawaii. It was still 7 December in the western hemisphere. The attack drew America into the Second World War.

The fall of Singapore and the Netherlands East Indies meant that the “Malay Barrier”, a notional chain of defences across south-east Asia, had been breached by early 1942. Australia was open to attack. 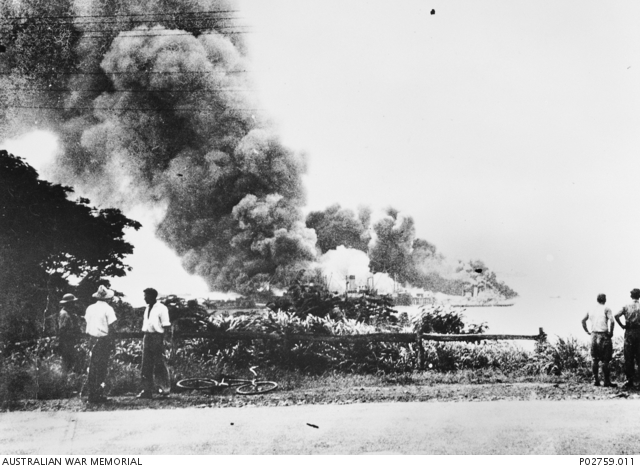 The merchant ships Neptuna and Barossa in Darwin Harbour.