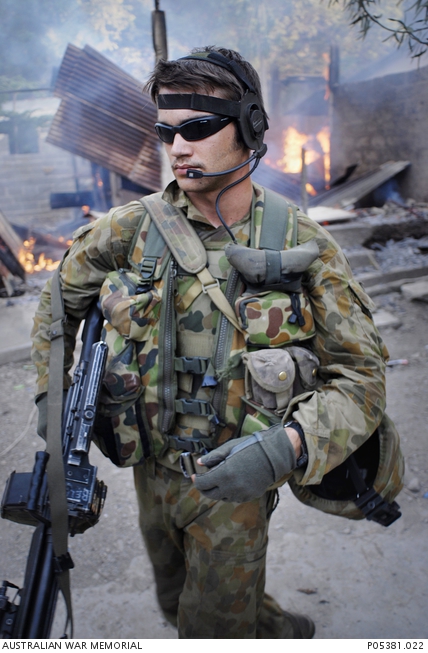 In the Memorial’s Western Front Gallery, a soldier’s uniform, still splattered with the dirt from the Western Front, sits in a showcase. The Memorial’s founder, Charles Bean, took the uniform and kit from a soldier as he emerged from a battle to give visitors to his planned Memorial an idea of what Australians wore and carried as they went into action.

Now, as we prepare to commemorate recent and continuing conflicts, a similar idea was suggested for Australian troops in Al Muthana province, Iraq. Five Australians were selected to hand over their uniforms at the end of a patrol for donation to the Memorial. Of these five uniforms one, worn by Private Christopher Donovan of 5/7th Battalion, will appear in the Recent Conflicts section of the new galleries. You will be able to get an idea of what Australian soldiers in the early 21st century wear and carry as they patrol southern Iraq. The high-tech equipment carried by Donovan speaks of the modern era, especially when compared to the uniforms of earlier eras.