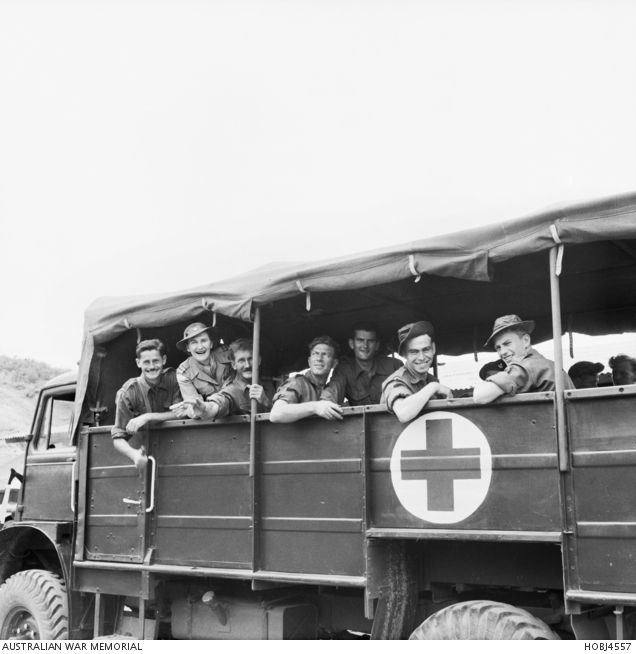 Unidentified Australian and British soldiers, accompanied by Miss Phyll Daymon of Hobart, Tas, and the Australian Red Cross, set off from the Freedom Village in Munsan-ni, in a Red Cross truck, for Britannia Camp, the second leg of their journey home. The soldiers had been prisoners of war (POWs) and had recently been released.

During the Korean War 30 Australians became prisoners of the Chinese and North Koreans, one of whom, Private Horrie ‘Slim’ Madden, died as a result of malnutrition and mistreatment at the hands of his captors.

The remaining 29 prisoners endured their captivity and returned to Australia in 1953, but not before undergoing a series of debriefing sessions. These sessions were ostensibly to check on their welfare, but were also used to ascertain whether or not they had been ‘turned’ by their captors and posed a security risk to Australia. In at least one case, that seemed to be proven true.

Soon after returning to Australia, the ex-prisoners began to feel that they were been watched. Bob Parker, who had been captured at Kapyong, heard strange noises on the telephone. When catching up with other returned prisoners, the men noticed they were being followed. The former Australian prisoners of the Chinese and North Koreans seemed to be caught in a trap.

Robert Wyse explores whether these former prisoners of war were the devils in disguise that the security agencies feared, and examines how much interest Australian authorities with suspicious minds really took in these former guests of the communists.

To read Robert’s article, purchase your copy of Wartime magazine.