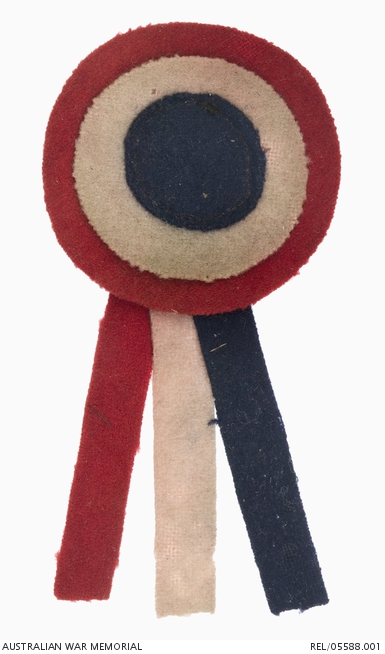 Anzac leave rosettes were worn by men who came home early on "Anzac leave" from mid-1918. They were given one to wear on each shoulder of their uniform as a sign of their status so that apparently able-bodied men would not be accused of shirking their duty. REL/05588.001

After further pressure from Prime Minister Billy Hughes in 1918, in September the War Office agreed to grant two months’ special furlough in Australia to the "originals" or “1914 men”. With travel time, it was anticipated that these men would be away from the front for five to six months.

There were estimated to be around 7,000 survivors of the first Australian contingent who had left Australia in 1914. The first men to commence Anzac leave arrived back in Australia in time for Christmas.

The decision to grant Anzac leave caused Lieutenant General Monash to accelerate the disbandment and amalgamation of the remaining Australian battalions on the Western Front.

After Armistice, this leave was extended to those who had enlisted in the first half of 1915, ensuring they would be the first soldiers repatriated to Australia. About 40,000 convalescents returned to Australia at the same time under medical control.