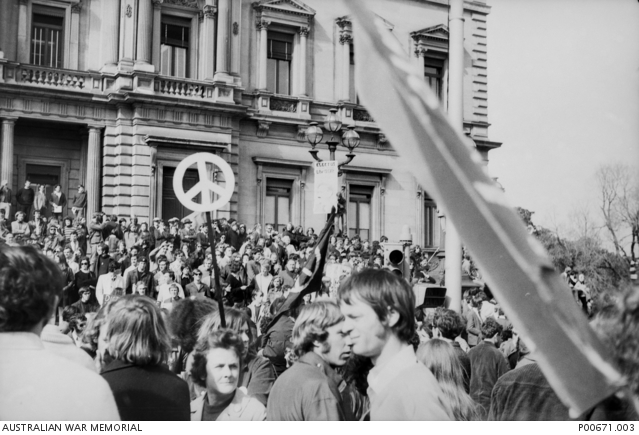 Melbourne, 1970. Section of crowd demonstrating at a Vietnam Moratorium march on the steps of Parliament House. C40174

The scheme was criticised as being irrelevant to modern defence needs, with skill was becoming more important than numbers. The scheme was also costly for the Regular Army, as manpower resources and funding had to be diverted from ongoing operational requirements to support the recruitment and training of short-term personnel. In 1959 the scheme was abolished.

A fourth period of National Service was introduced in 1964, and in May 1965 the Coalition Government introduced new powers that enabled it to send national servicemen overseas. At that time Australian soldiers were involved in the war in Vietnam and with Indonesian Confrontation. The Menzies Government wished to raise the army's numbers to 40,000 in order to meet overseas commitments.

All 20-year-old males had to register with the Department of Labour and National Service, and their names were selected by the "birthday ballot", in which men were randomly selected for national service by their date of birth. Those who were selected for national service were required to serve for two years full-time in the Regular Army and three years part-time in the reserves.

Exemptions were given to Aborigines and Torres Strait Islander peoples, the medically unfit, and theology students. Young men were granted exemption on the grounds of conscientious objection if they could prove their objection to war was based on religious beliefs. A temporary deferment of national service was granted to university students, apprentices, married men, and those who could prove that national service would cause them financial hardship.

From 1965 to 1972, over 15,300 national servicemen served in the Vietnam War, with 200 killed and 1,279 wounded. Once again the issue of conscription provoked debate within the Australian community, with university students and other members of the community taking part in large anti-conscription and anti-Vietnam War demonstrations. The National Service scheme was abolished on 5 December 1972 by the newly elected Labor Government.