At the outbreak of the First World War, the number of people volunteering to enlist for the Australian Imperial Force (AIF) was so high that recruitment officers were forced to turn people away. As the war went on, casualty rates increased and the number of volunteers declined. By 1916 the AIF faced a shortage of men.

Legislation prohibited members of the Australian Military Forces from serving beyond the limits of the Commonwealth or its territories “unless they voluntarily agree[d] to do so” (Defence Act 1903, s. 49), which meant the government could not compel Australian citizens to serve overseas. 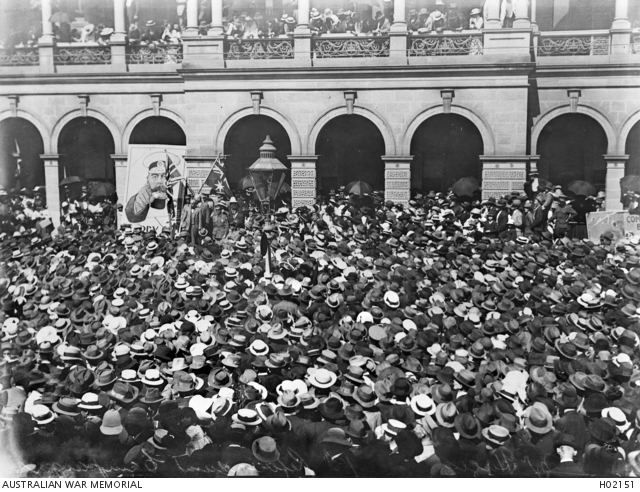 Labor Prime Minister Billy Hughes reached the conclusion that conscription would be necessary to raise the required number of reinforcements. However, conscription was strongly opposed by his own party in the senate.

Hughes decided to take the issue directly to the people. Although the process Hughes used to obtain a popular mandate was a plebiscite, it was referred to as a referendum.

The proposal to introduce conscription provoked furious debate within the Australian community.

The referendum was narrowly defeated, with 1,160,033 votes against and 1,087,557 votes in favour. On a state basis, New South Wales, Queensland and South Australia voted a majority against conscription, while Victoria, Western Australia, Tasmania and the Federal Territories voted in favour of conscription.

In the ensuing political fall-out, the Labor Party split and Hughes formed a breakaway party called the Nationalists.

Enlistment numbers continued to fall, and in 1917 Hughes called for a second referendum on the issue of conscription. The second conscription campaign was just as heated as the first, with the most prominent anti-conscription activist being the Catholic Archbishop of Melbourne, Dr Daniel Mannix.

The second referendum was held on 20 December 1917. Australians were asked:

Are you in favour of the proposal of the Commonwealth Government for reinforcing the Australian Imperial Forces overseas?

Australia, South Africa, and India were the only participating countries not to introduce conscription during the First World War.