By August 1944 there were 2,223 Japanese prisoners of war in Australia, including 544 merchant seamen. Of these 1,104 were housed in Camp B of No. 12 Prisoner of War Compound near Cowra, in the central west of New South Wales. They were guarded by the 22nd Garrison Battalion.

On Friday 4 August, in response to information that the Japanese were discussing a mass outbreak, notice was given that all Japanese prisoners below the rank of Lance Corporal would be transferred to the Hay Prisoner of War Camp. About 2 am on Saturday 5 August 1944 a prisoner ran shouting to the camp gates. Soon afterwards an unauthorised bugle was heard and prisoners, armed with knives and improvised clubs, rushed from their huts and began breaking through the wire fences. Sentries opened fire but several hundred prisoners escaped into open country, while others who remained set fire to the camp buildings.

On the night of the breakout three Australian soldiers were killed and another three were wounded. Privates B.G. Hardy and R. Jones, who were overwhelmed while manning a machine gun post, were posthumously awarded the George Cross. In the following nine days 334 prisoners were retaken. In all, 234 Japanese were killed and 108 wounded. 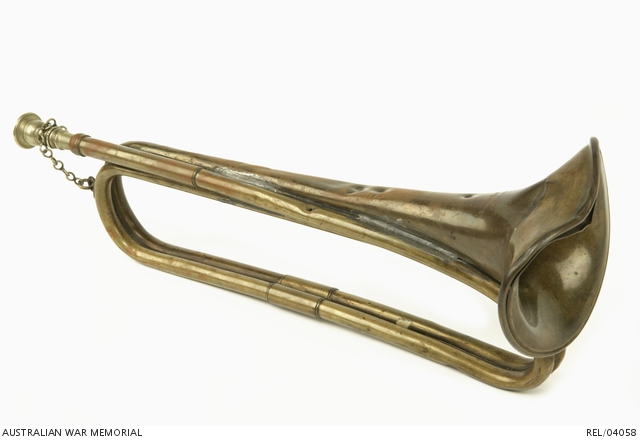 The bugle used to signal the Japanese breakout. C115060