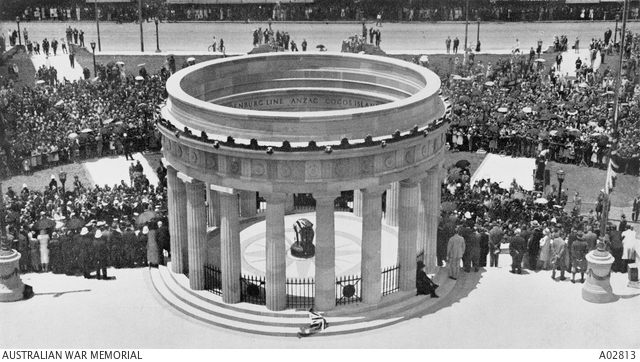 Dedication of the Queensland National Anzac Memorial with bronze urn in the centre holding an eternal flame, 11 November 1930.

Australia's first eternal flame was lit in Brisbane on Armistice Day in 1930 and is similar in appearance to the eternal flame in Antwerp, Belgium. A press clipping of the time described the flame as "strikingly typical of the Anzac spirit and … while offering a tribute of thankfulness and pride, it should ever remain a beacon of light and inspiration to rising and future generations."

A second Australian eternal flame was lit in the Shrine of Remembrance in Melbourne by the Queen in 1954 and commemorates the dead of the Second World War. The flame was described as a symbol of sacrifice and of the perpetuity of remembrance.

There is now an eternal flame at the Kings Park Memorial in Perth which was lit in 2000 from a flame taken from the Australian War Memorial, thus providing a symbolic link to the place where the names of all Australia's war dead are recorded.

Another flame taken from the Memorial now burns at a new memorial in Anzac Way, Townsville, Queensland. Anzac Way is an avenue which leads to the Cenotaph. The flame was lit in April 2001 at the opening of this memorial, which is dedicated to the deeds and sacrifices of ordinary people.