The French-Australian League of Help held its first public meeting in Sydney in December 1914. Its formation was due to a request from the War Chest Fund for assistance in providing comforts for the troops in France. This followed a November appeal for donations by Madame Georges Playoust, who became one of the first co-presidents.

Money was raised throughout Australia, including country areas, for French troops and their families. A clothing workshop was set up and fortnightly shipments were sent through the French Red Cross in London. Labels "Made in Australia by your friends" were sewn to articles of clothing. Two orphanages, "Waratah" and "Australie", were set up in France. Funds were used also to purchase ambulances.

A headquarters was established in Paris and the league cooperated with French military and civilian charities. Mr Holman, the other co-President, was awarded the Legion d'Honneur in June 1916.

After the war the league assisted in the reconstruction of French towns and farms, particularly in the Ardennes; providing funds to refurnish homes; and buying agricultural machinery and equipment for schools. Hundreds of thousands of pounds were contributed by Australians through the League. One French village changed its name from "Poilcourt" to "Poilcourt-Sydney" in gratitude for the aid received.

The League was re-established during the Second World War. 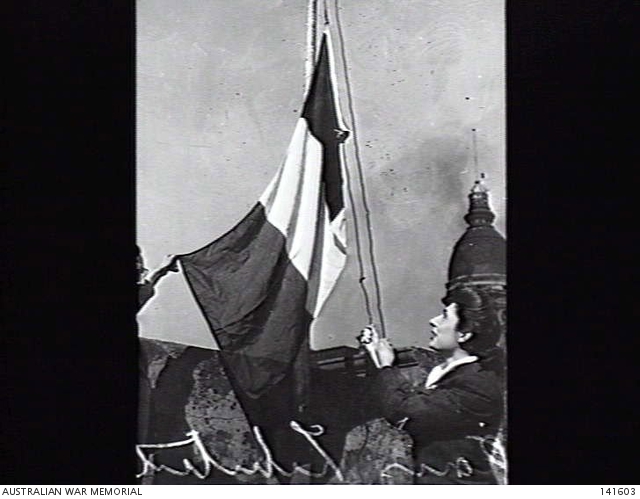 Mlle Josie Verschueren, French-Australian Association and a member of the Free French Community, hoisting the flag of Free France during a celebration on 24 August 1944 to mark the liberation of Paris.  C269033