On 2 August 1990, the military forces of Iraqi dictator Saddam Hussein invaded its rival oil-exporting neighbor Kuwait. It was widely condemned throughout the world, and four days later, the UN Security Council unanimously approved a trade embargo against Saddam’s regime. Over the following months, US-led coalition of 40,000 troops across 30 nations formed in Saudi Arabia and in the Persian Gulf to enforce UN sanctions against Iraq (known as Operation Desert Shield).

The UN Security Council also set 15 January 1991 as the deadline for an Iraqi withdrawal from Kuwait, which Saddam ignored. This resulted in a full-scale war (known as Operation Desert Storm) when coalition forces began 42 days of devastating air strikes on Iraqi military targets in Kuwait and over the Iraqi capital, Baghdad. On 24 February 1991, the coalition moved ground forces against Iraqi positions in Kuwait, the magnitude and decisiveness of which destroyed what was left of Iraq’s ability to resist. Two days later, Iraqi forces began to withdraw across the border, setting fire to more than 600 Kuwaiti oil wells and dumping millions of barrels of crude oil into the Persian Gulf. Iraqi forces were expelled from Kuwait, and a ceasefire declared on 28 February 1991.

Some 1,800 Australian Defence Force personnel served during the Gulf War between August 1990 and September 1991. 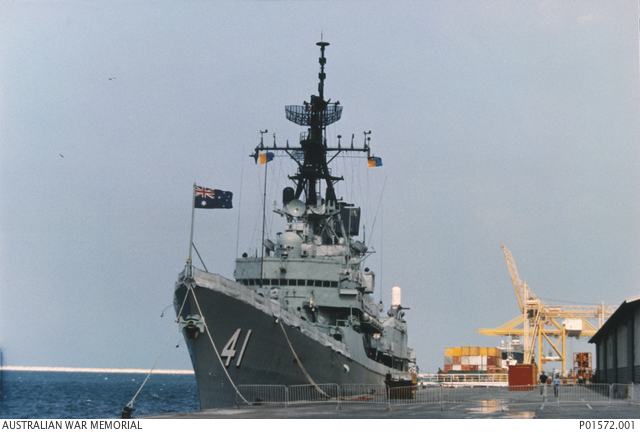 The main Australian contribution to the conflict was through a three-ship RAN task force that deployed to the region in August 1990 to enforce UN sanctions against Iraq in the Persian Gulf and neighboring waters. Under the auspices of Operation Damask, the first rotation of RAN warships consisted of the Adelaide-class guided missile frigates HMAS Adelaide (II) and Darwin (I) and the replenishment oiler HMAS Success, which enforced the trade embargo against Iraq through boardings and interceptions in the Gulf of Oman as part of the Maritime Interception Force.

In December 1990, the two RAN frigates were replaced by the Perth-class guided missile destroyer HMAS Brisbane (II) and the frigate HMAS Sydney (IV), which were on-station at the commencement of Operation Desert Storm in the early hours of 17 January 1991. They had moved into the Persian Gulf to form part of the screen around the US aircraft carrier group, Battle Force Zulu, providing anti-aircraft and anti-ship protection, and controlling fighter air combat patrols. Success continued to provide sustainment and logistical support for coalition vessels in Gulf of Oman until replaced by HMAS Westralia on 26 January 1991.

In addition to the RAN task group, detachments from the Army's 16th Air Defence Regiment served aboard Success and Westralia, a RAN Clearance Diving Team later carried out explosive ordnance disposal in Kuwait, RAAF photo-interpreters and Defence Intelligence Organisation personnel were based in Saudi Arabia, and four ADF medical teams served aboard the US hospital ship USS Comfort. Around 20 ADF officers and NCOs were on exchange to US and British units involved in the ground war phase of Operation Desert Storm.

Afterwards, all three ADF services contributed personnel to ongoing post-conflict operations in Iraq, which included humanitarian efforts to assist Kurdish refugees displaced by ongoing violence in Iraq (Operation Habitat) and as part of broader UN efforts (UNSCOM) to locate, identify and destroy Iraq’s chemical, biological and nuclear weapons capability (Operation Blazer). RAN warships continued to serve in the Persian Gulf, the Gulf of Oman and the Red Sea to enforce UN sanctions against Iraq as part of Operation Damask until November 2001.

No deaths occurred among Australian forces deployed to the Gulf War of 1990-91, although coalition losses amounted to 166.