Rationing of food and clothing during the Second World War

Rationing regulations for food and clothing were gazetted on 14 May 1942. Rationing was introduced to manage shortages and control civilian consumption. It aimed to curb inflation, reduce total consumer spending, and limit impending shortages of essential goods. The broad reasoning behind the introduction of rationing was to ensure the equitable distribution of food and clothing. It was also hoped that a cut on consumer spending would lead to an increase in savings, which in turn could be invested in war loans.

Australians were never as short of food nor rationed as heavily as civilians in the United Kingdom. Rationing was enforced by the use of coupons and was limited to clothing, tea, sugar, butter, and meat. From time to time, eggs and milk were also rationed under a system of priority for vulnerable groups during periods of shortage.

Rationing was administered by the Rationing Commission. The basis for policing food rationing was through the surrender of coupons before rationed goods could be supplied. This had to occur between traders as well as consumers. Coupons were passed back from consumers to retailers, from retailers to wholesalers, and in many cases from wholesalers to producers, who were requested to return them to the commission.

Breaches of rationing regulations were punishable under the general provisions of National Security Regulations by fines of to £100 or up to six-months imprisonment. Responding to the complaint that these penalties were inadequate, the government passed the Black Marketing Act at the end of 1942. This Act was for more serious cases and could carry a minimum penalty of £1,000. 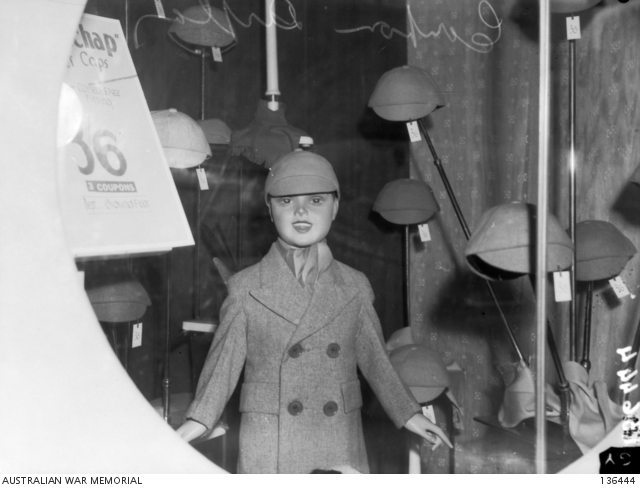 A window display in a city store showing the price tag and number of coupons required for the purchase of a child's overcoat and caps.
C257671

Date of gazettal for coupon rationing

This table reflects initial quantities. Many items were adjusted and rations reduced at a later date.