During 1942 food shortages began to have an impact on the Australian home front. The agricultural industry was struggling with massive labour shortages, a severe and prolonged drought, and major shortfalls in imports of seed stock and fertiliser. There was a growing realisation that unless agriculture became a focus of the war effort, food shortages would be imminent.

In January 1942 the Prime Minister, John Curtin, launched “Dig for Victory”, a publicity campaign urging householders throughout Australia to grow their own vegetables as a contribution to the war effort. The press loved and promoted the idea, as did industry and local community groups.

Many Australians were already keen home vegetable gardeners, being self-sufficient, with fruit and vegetables and a “chook shed” down the back. Others took to the idea afresh and turned over their whole front and back gardens to vegetable production, often selling excess produce to raise funds for the front. Some people formed neighbourhood gardening groups as a means of feeding their families. Others formed gardening collectives, specifically to raise funds for the war effort. Legacy, the Red Cross, the YWCA, and the Salvation Army were some of the organisations that received funds raised through neighbourhood gardening.

The idea of establishing “Garden Armies” was invented by the YWCA, who created “Garden Army Week” in July 1942 to advertise the cause. Melbourne recruits rose from 500 in June that year to several thousand in July. The garden armies received broad media coverage, from photographs of women in overalls wielding pitchforks to attention-grabbing production targets, such as 50 tons of onions for the front. Many municipal councils also organised gardening collectives and some councils provided incentives, including awarding volunteers a badge with a three carrots design.

As the fear of invasion dissipated towards the end of 1943 food production became more of a national priority. Even though improvements were made in the agricultural sector to meet the demands of war, home gardening continued to raise funds and morale, and feed local communities and families, throughout the war. 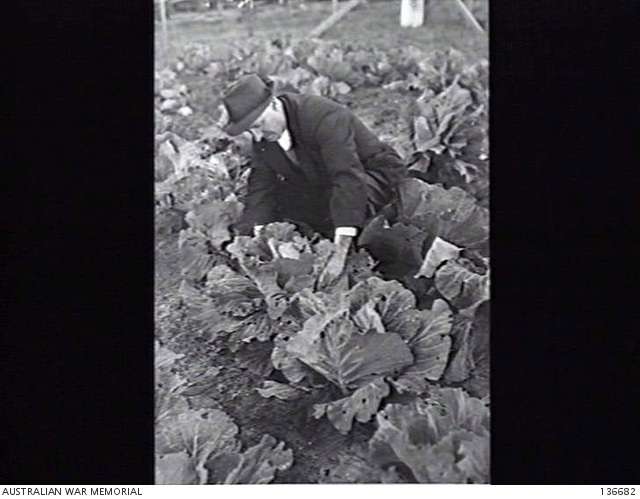 A voluntary worker in a bed of cabbages in the “Dig for Victory” garden at Wattle Park in Melbourne, September 1942. AWM 136682