Early in 1941, Private Jim Moody, VX13091, 2/1st Machine Gun Battalion found a puppy in the Ikingi Mariut area of the Western Desert, Egypt. "Horrie" became the unofficial mascot of the battalion, travelling with them from Egypt to Greece, Crete, Palestine and Syria then back to Australia in 1942.

Horrie was intelligent and easily trained. He acted as a guard dog and many times gave early warning of the approach of enemy aircraft. He survived the sinking of the Costa Rica on which the unit was being evacuated from Greece to Crete. In Crete, he was wounded by a bomb splinter, which had to be removed with a knife. To keep him warm in Syria's severe cold, Horrie was issued with a coat cut from a soldier's service dress tunic.

When Moody returned to Australia in April 1942, he smuggled Horrie ashore inside a modified travelling pack. The pack was lined with wood and had slits cut in the back for ventilation.

Horrie's story was about to be published in a book by Ion Idriess, Horrie the wog-dog: with the A.I.F. in Egypt, Greece, Crete and Palestine. Moody offered to use the publicity Horrie would get from the book to assist the Red Cross Society's fund-raising efforts. This alerted quarantine officials to the dog's history. They were adamant: Moody had to surrender Horrie, who was destroyed on 12 March 1945.

Anthony Hill's book Animal heroes suggested a different ending for Horrie. Hill claimed that a look-alike dog was surrendered in Horrie's place, and that Horrie lived the rest of his life near Corryong, Victoria. 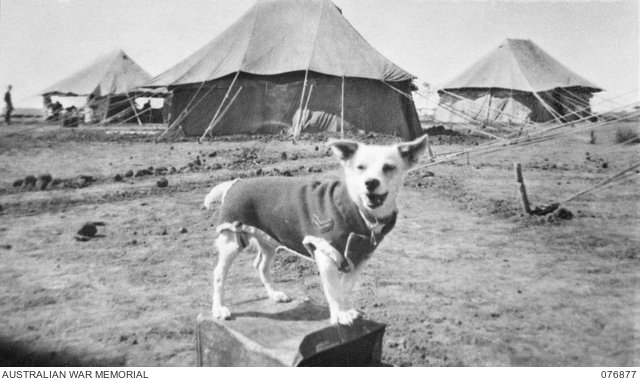 The Memorial's collection includes Horrie's uniform and the travelling pack which was used to smuggle Horrie into Australia.