The official history of the Australian Army Medical Service during the First World War denied the presence of “moral perversion” in the Australian Imperial Force, stating: “There is no evidence pointing to any significant homosexuality in the Force, and this is on par with Australian experience in general. The records of the [AIF] therefore provide no contribution to the place of the homosexual in a total war effort.”

While there is ample anecdotal evidence that homosexual acts occurred between serving members, the idea of a distinct homosexual identity was relatively new, and sex between men who considered themselves heterosexual was not uncommon. The difficulty of finding a female sexual partner meant that their encounters represented a practical alternative to female company.

In theory, sex between servicemen was a criminal act which carried severe, life-changing consequences. In practice, soldiers’ sexual activity was seen by military authorities as a natural instinct that had to be managed. 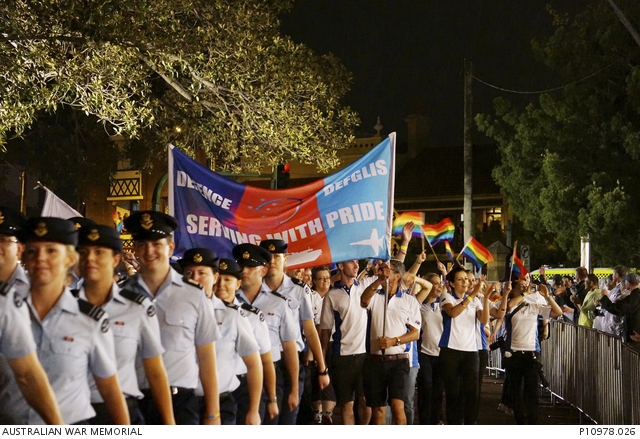 The 2013 Mardi Gras parade was the first time Gay, Lesbian, Bisexual, Transgender and Intersex ADF personnel were allowed to march in uniform, openly representing the ADF. In all, 120 members of the ADF, from Army, Navy and Air Force marched in uniform at this parade and were supported by members of DEFGLIS.

Historian Frank Bongiorno's The Sex Lives of Australians: A History suggests that that there were likely considerably more instances of homosexual activity in the defence forces than have survived in the record because, when discovered, it was dealt with “quietly and informally, so as not to draw attention to its embarrassing presence”.

While the most serious offenders whose conduct would impair military efficiency were removed from the services, same-sex desire was otherwise largely ignored or dealt with informally.

The First and Second Australian Imperial Force, which consisted of volunteers serving during a period of national crisis, were desperate for manpower, and so many homosexual acts were unofficially tolerated.

At the end of the Second World War, gay bars in Kings Cross bulged with servicemen and sailors as warships came to port – a gay bar called “Diggers” even opened in Sydney. As the period of crisis came to an end, the lenient attitude that had prevailed during the war was replaced with a doctrine of treatment and expulsion.

The Royal Australian Navy developed policies specifically targeting homosexuality from the 1950s, adhering to the British Royal Navy’s Admiralty Fleet Orders against “Unnatural Offences” before introducing a new policy on “Abnormal Sexual Behaviour” in 1969. The continuing development of a distinct homosexual identity was highlighted by the distinction between “confirmed homosexuality” and “An Isolated Instance of Homosexuality”.

These policies specifically referred to men. While there were concerns about lesbianism during the Second World War, there were no specific regulations against lesbianism. As the role of women in the Australian military began to change in the mid-1970s – along with growing opportunities for increased female participation – this too changed. In June 1974, a new framework for dealing with homosexuality was approved. It was now the responsibility of the service police to investigate cases of suspected homosexuality, male and female. A minority of cases were dealt with as disciplinary matters, while the bulk of cases would be dealt with administratively. “Confirmed homosexuals” could request honourable discharge, or else be dishonourably discharged. Gay, lesbian and bisexual personnel could be subject to what were colloquially known as “witch-hunts”: surveillance, secret searches, and being summoned at short notice for long, often confrontational interviews.

The nadir perhaps came on Anzac Day 1982, when Bruce Ruxton, then head of the Victorian Returned Serviceman’s League, prevented members of the Members of the Gay Ex-Services Association from laying a wreath at the Shrine of Remembrance in Melbourne. Earlier that day Ruxton had told broadcaster Derryn Hinch that if his son was queer, he would shoot him. “I don’t know where all these gays and poofters have come from,” he was later quoted as saying, “I don’t remember a single one from World War Two.”

The catalyst for change came in the 1990s, when a lesbian servicewoman challenged her dismissal at the Human Rights and Equal Opportunity Commission, prompting an investigation into the situation. This led to the Keating Government lifting the ban on gay and lesbian personnel on 23 November 1992.

While the end of the ban meant an end to the witch-hunts of the past, it did not end homophobia; discrimination against gay, lesbian and bisexual service members was widespread. Air force sergeant David Mitchell started a gay and lesbian social support group within the defence force,  G-Force, which organised the first defence contingent at the Sydney Gay and Lesbian Mardi Gras in 1996.

G-Force was succeeded by DEFGLIS, the Defence Force Lesbian Gay Bisexual Transgender and Intersex Information Service, which continued the push for the extension of benefits to same-sex partners.

In 2002, the partner of a deceased Second World War veteran lodged a formal complaint to the UN Human Rights Committee when he was denied a spousal pension. The UN found in the complainant’s favour in 2003, but the Howard Government refused to implement the UN committee’s ruling. Equal entitlements to military retirement pensions and superannuation for the domestic partners of LGBTI personnel were introduced in 2009. Since 2010, transgender personnel may serve openly and may undergo gender transition with ADF support while continuing their military service.

Today, the ADF aims to be an “employer of choice” not only for people of diverse sexualities, but also for transgender personnel. The ADF supports events such as Wear it Purple Day, sends defence force recruiting to major LGBTI events and has created LGBTI advisory roles. 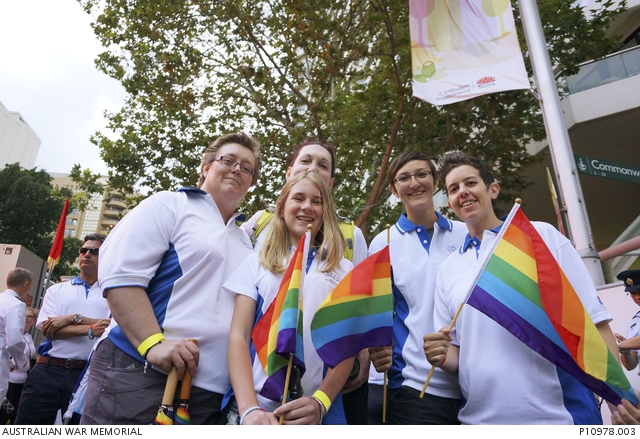 Members of the Defence Lesbian, Gay, Bisexual, Transgender and Intersex Information Service (DEFGLIS) at the beginning of the Sydney 2013 Mardi Gras march.

“Twenty-five years after the ban on lesbians and gays in the military was lifted, there is much to celebrate”, The Conversation: https://theconversation.com/twenty-five-years-after-the-ban-on-lesbians-and-gays-in-the-military-was-lifted-there-is-much-to-celebrate-87764

Parliament of the Commonwealth of Australia, Homosexuality and the Australian Defence Force: The Issues, Background Paper 16, 1992: https://www.aph.gov.au/binaries/library/pubs/bp/1992/92bp16.pdf