One of the oldest Imperial forms of recognition for bravery or distinguished service is when a serviceman or servicewoman was Mentioned in Despatches.

A despatch is an official report, written by a senior commander in the field to pass on information about the progress of military operations. Commanders would include in their despatches the names of those deserving attention to their services. Mentions may be for a specific act of bravery or for a period of outstanding service. During the Boer War it became common practice to list the names at the end of a despatch.

If your name appeared in these lists you were said to have been “Mentioned in Despatches”. The despatches were usually published in The London Gazette, so a mention equated to a public commendation.

This and the Victoria Cross were the only forms of recognition for gallantry or distinguished service in action that could be made posthumously.

Prior to 1919 those Mentioned in Despatches did not receive any form of recognition other than having their names published in The London Gazette. In 1919 a certificate was introduced to acknowledge those who received mention.

The following year an emblem of bronze oak leaves was issued to individuals who had been Mentioned in Despatches between 4 August 1914 and 10 August 1920. The device was to be worn at a low angle in the centre of the ribbon of the Victory Medal. Only one device was awarded per person, even if an individual was mentioned more than once.

After the First World War the emblem was changed to a single bronze oak leaf. Emblems granted for mentions during the Second World War were worn in the centre of the 1939–1945 War Medal. For those Mentioned in Despatches between the two world wars, or after the cessation of hostilities in the Second World War, the emblem was worn on the ribbon of an appropriate general service medal. 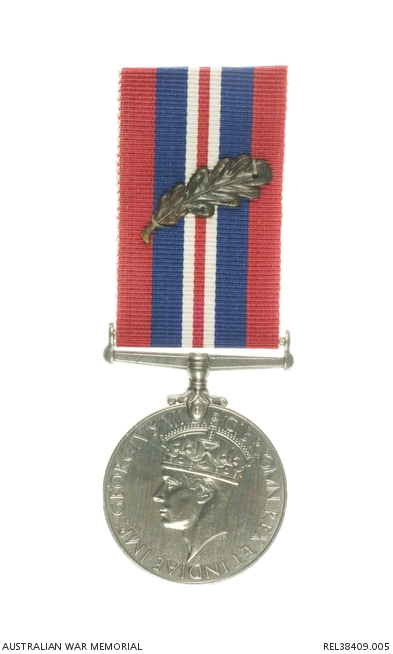 Lieutenant Sparrow and Corporal Reddie, both of the New South Wales Infantry, were Mentioned in Despatches sent by Lieutenant General Sir G. Graham to General Lord Wolseley for 30 May 1885. Graham praised the Camel Corps and named these men as among those “whom I would notice”.

Many Australian Defence Force personnel were Mentioned in Despatches during the First and Second World Wars. Their names were published in The London Gazette and also the Commonwealth of Australia Gazette.

This tradition continued in Australia until the end of the Vietnam War, but was phased out with the introduction of the Australian system of honours and awards in 1975. More than 15,000 Australian Defence Force personnel were Mentioned in Despatches.

It can be difficult to confirm why a person was Mentioned in Despatches. Those awarded for good service over a period rather than for a specific action may not have included a citation.

Citations for honours and awards, where they are available, can be found in the Memorial’s Honours and Awards database. However, not all award citations were archived after the war.