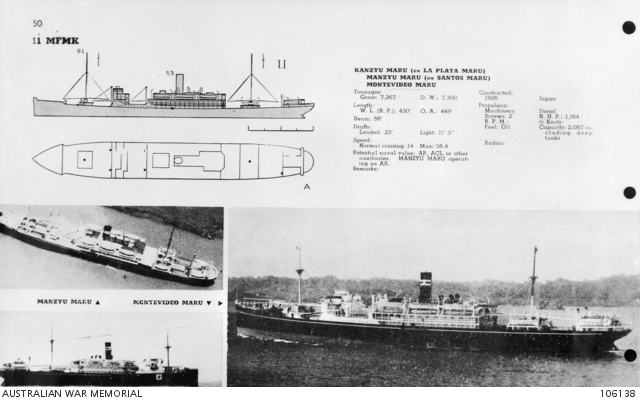 The 7,266 ton, twin-screw diesel motor vessel, the MV Montevideo Maru, was a Japanese passenger vessel constructed in Nagasaki in 1926. It was operated until the outbreak of the Second World War by the Osaka Shosen Kaisha Shipping Line for its service between Japan and South America.

During the Second World War the Montevideo Maru was used by the Imperial Japanese Navy as an auxiliary vessel transporting troops and provisions throughout South East Asia. As a part of the Kure Naval District, the vessel participated in landings at Makassar in the Netherlands East Indies. After operating in the Japanese islands, the Montevideo Maru returned to Java before sailing for New Britain.

Early in the morning of 22 June 1942, members of the Australian 2/22nd Battalion, No.1 Independent Company, and civilian prisoners captured in New Britain were ordered to board the vessel. For the march to the waterfront, Japanese guards divided the prisoners into groups of approximately fifty men. Only the officers and a small number of civilians were left in the Malaguna Road camp. The Montevideo Maru sailed unescorted for Hainan Island, keeping to the east of the Philippines in an effort to avoid Allied submarines.

Eight days into the voyage, the Montevideo Maru was spotted by the American submarine USS Sturgeon. For approximately four hours the Sturgeon manoeuvred into a position to fire its four stern torpedoes. The USS Sturgeon’s log records an impact at 2.29 am, approximately 100 feet (30 metres) aft of the funnel. Survivors from the Montevideo Maru’s Japanese crew reported two torpedoes striking the vessel followed by an explosion in the oil tank in the aft hold.

According to both the Sturgeon’s log and the Japanese survivors, the Montevideo Maru sank by the stern in as little as eleven minutes from the torpedo impact. Although the Japanese crew were ordered to abandon ship, it does not appear they made any attempt to assist the prisoners to do likewise. The ship’s lifeboats were launched but all capsized and one suffered severe damage. Of the 88 Japanese guards and crew, only 17 survived the sinking and subsequent march through the Philippine jungle.

While the exact number and identity of the more than 1,000 men aboard the Montevideo Maru has never been confirmed, Japanese and Australian sources suggest an estimated 845 military personnel and up to 208 civilians lost their lives in the tragedy.

Considerable efforts were made by both the International Red Cross and the Australian government to seek details of the Montevideo Maru’s passengers from the Japanese authorities. Despite evidence that the Japanese navy forwarded information about the loss of the vessel to Japan’s Prisoner of War Information Bureau as early as January 1943, Australian authorities were not provided with a list of casualties until October 1945, when Major H.S. Williams of the Recovered Personnel Division in Tokyo began investigations into the loss of Montevideo Maru. Links to the report prepared by Major Williams, and the initial translation of the Japanese list, are provided below.