Nurse survivors of the Vyner Brooke

When the fighting on the Malayan peninsula reached a climax in early 1942, and both the probability of a retreat to Singapore Island and its risks became apparent, the problem of returning the seriously ill and wounded, as well as the members of the Australian Army Nursing Service (AANS), to Australia became urgent. Tragically, no evacuation by hospital ship was made while there was still time.

On 10 February 1942, six members of the AANS embarked on the Wah Sui with 120 sick and wounded soldiers of the Australian Imperial Force. On 11 February, 59 nurses embarked on the Empire Star, and another 65 sisters and physiotherapists sailed on the Vyner Brooke on 12 February. On 14 February, while heading for Sumatra via Banka Strait, the Vyner Brooke was sunk by Japanese bombers. Sister Vivian Bullwinkel was with a group of 22 survivors on Banka Island when a Japanese patrol arrived and ordered the women in the group to walk into the sea. They were machine-gunned from behind. All except Sister Bullwinkel were killed.

Of the 65 servicewomen who embarked on the Vyner Brooke, only 24, including Vivian Bullwinkel and Betty Jeffrey, returned to Australia. Of the 32 taken prisoner of war, eight died in captivity. 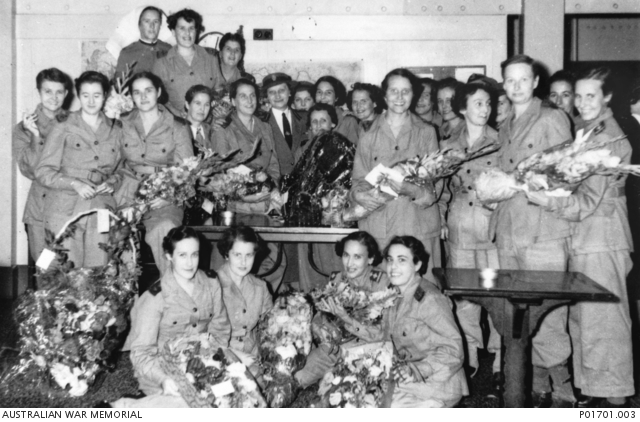 Group portrait of Australian Army Nursing Service (AANS) nurses, who were former prisoners of war (POWs), aboard the hospital ship Manunda on its arrival. (Matron Vivian Bullwinkel is third from the right holding flowers.)  C256614