Princess Mary's Christmas Gift was a brass tin filled with various gifts, such as tobacco, confectionary, spices, pencils, a notebook, postcards and a picture of the princess. The idea was the initiative of Princess Mary, the 17-year-old daughter of King George V and Queen Mary. Princess Mary was responsible for the public appeal that raised the funds to ensure that "every Sailor afloat and every Soldier at the front" received a Christmas present.

All British, colonial, and Indian soldiers and sailors who were serving on Christmas Day 1914 were eligible to receive a gift tin. Over 456,000 tins were distributed. However the difficulties of manufacturing and distributing over 2.5 million tins meant that tins were still being received in 1920. Tins sent out after January 1915 contained a victorious new year greeting instead of a Christmas card.

The rectangular tin has a hinged lid and is embossed on top with a profile of the princess surrounded by a wreath. The letter "M" is embossed on either side of the wreath in cursive script. A decorative border around the lid contains the words "Imperium Britannicum" at the top and "Christmas 1914" at the bottom. The corners and sides contain the names of Britain 's allies between decorations of flags, ships and weapons. The nations represented are, from the top right-hand corner, Japan, Russia, Montenegro, Serbia, France, and Belgium.

Having used or consumed the contents, soldiers and sailors found the tins useful for carrying other small items. Today many tins are held in public and private collections or by families who have inherited them. Tins which still hold their original contents are rare. 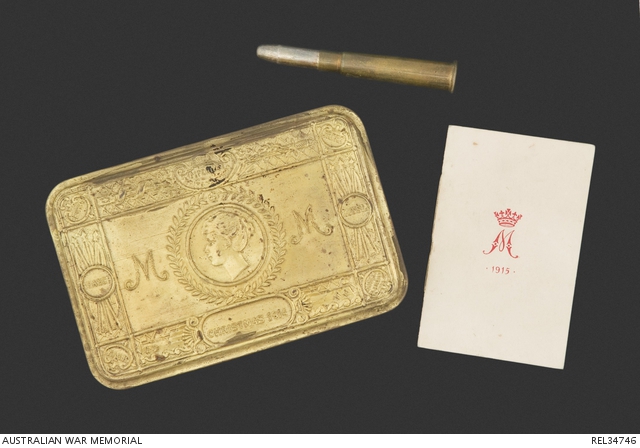