In 1915 recruiting committees were formed in nearly every town throughout Australia. In the central west of New South Wales a movement began which became known as the 'Gilgandra snowball'. Under the leadership of W.T. ('Captain Bill') Hitchen, 20 or so men who had determined to enlist started off to march to Sydney. Gathering other recruits along the way, they numbered about 300 by the time they reached Sydney. This was known as the Coo-ee March.

Their example was soon followed by other marches from around New South Wales and Queensland: the Waratahs, Kangaroos, Wallabies, Dungarees, Men from Snowy River, Kurrajongs, Kookaburras, Central West Boomerangs and North Coast Boomerangs. They relied on the support of the communities they passed through, which was often enthusiastic. The total number of men involved was only about 1,500 but the marches attracted wide publicity and may have encouraged fund-raising and enlistment more generally.

Military authorities were not always supportive, as they doubted if the numbers of men recruited justified the effort and expense. There were also problems with discipline, and disputes over exactly when marchers became eligible to receive pay and equipment.

In 1918 further 'Freedom' marches were organised but were relatively unsuccessful 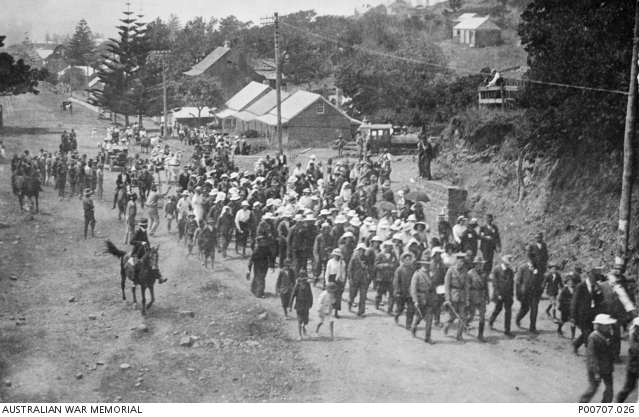 The Waratahs recruiting march, leaving Kiama, led by army personnel, on the way to Jamberoo. C46206