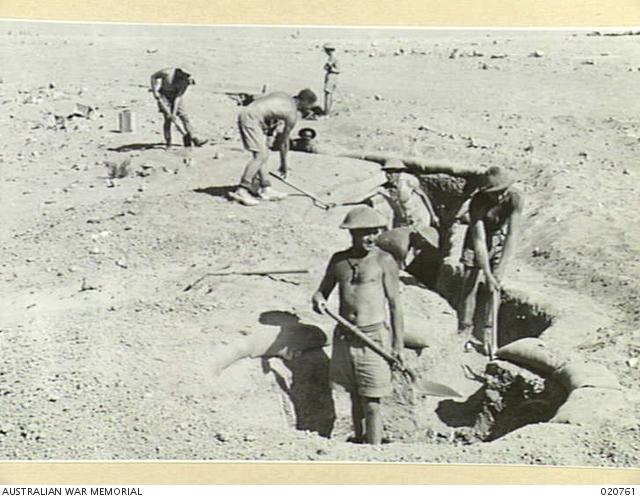 Men of the 2/13th Australian Infantry Battalion 'digging in'.

Between April and August 1941 around 14,000 Australian soldiers were besieged in Tobruk by a German–Italian army commanded by General Erwin Rommel. The garrison, commanded by Lieutenant General Leslie Morshead, consisted of the 9th Division (20th, 24th, and 26th Brigades), the 18th Brigade of the 7th Division, along with four regiments of British artillery and some Indian troops.

It was vital for the Allies' defence of Egypt and the Suez Canal to hold the town with its harbour, as this forced the enemy to bring most of their supplies overland from the port of Tripoli, across 1500 km of desert, as well as diverting troops from their advance. Tobruk was subject to repeated ground assaults and almost constant shelling and bombing. The Nazi propagandist Lord Haw Haw (William Joyce) derided the tenacious defenders as 'rats', a term that the Australian soldiers embraced as an ironic compliment.

Half the Australian garrison was relieved in August, the rest in September-October. However, 2/13 Battalion could not be evacuated and was still there when the siege was lifted on 10 December, the only unit present for the entire siege.