"Wallaby airlines" was the popular name for Royal Australian Air Force Transport Flight Vietnam (RTFV), which was renamed No. 35 Squadron on 1 June 1966. The name referred to its radio callsign "Wallaby", rather than to the RAAF roundels on the aircraft, which featured a kangaroo painted in red. Wallaby airlines flew twin-engined DHC-4 Caribous and were active in Vietnam from 1964 to 1972. 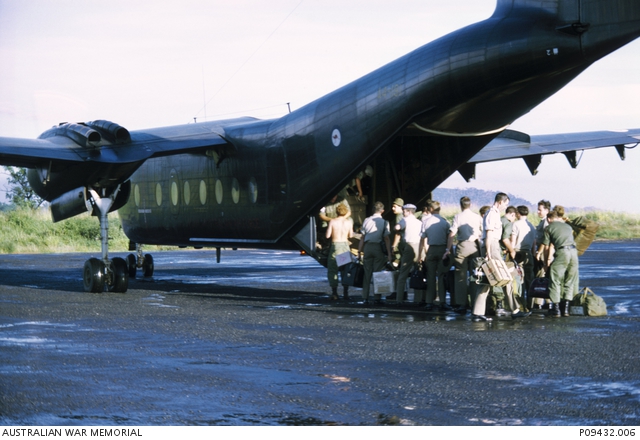 The RTFV was formally brought into existence on 20 July 1964, with Squadron Leader C.J. Sugden as the new unit's commanding officer. The tasks of Wallaby airlines included:

Wallaby airlines and their Caribous spent seven and a half years on active service and in this period flew nearly 80,000 sorties totaling 47,000 hours in the air. They carried more than 677,000 passengers, 36 million kilograms of freight and 5 million kilograms of mail. While there were incidents in which the crew of Wallaby airlines were injured, there were no fatalities.

Australian Prime Minister William McMahon announced on 30 March 1971 that the Australian presence in Vietnam would be further reduced. The decision was made to return three aircraft and 44 personnel from No. 35 Squadron to Australia. The three aircraft flew out of Vung Tau on 1 June 1971, bound for Richmond air base, reaching their destination on 7 June. On 16 September 1971 it was announced that the rest of the Wallabies would return to Australia early the following year. On 19 February 1972 the remaining four Caribous took off from Vung Tau for the last time, landing at Richmond on 26 February.