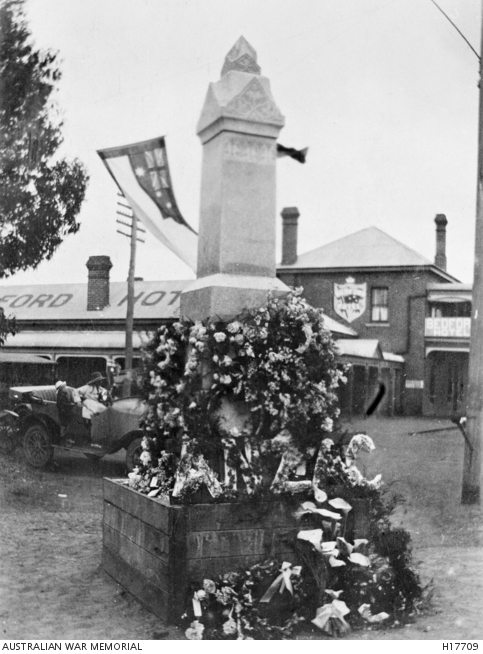 The war memorial movement was underway before the First World War had ended. With almost two-fifths of men aged between 18 and 44 enlisting in the Australian Imperial Force, every community was touched by the war. Committees were established to create memorials in recognition of the service and sacrifice of members of the local community who had served their country.

In Australia war memorials held a special significance, as they often represented “surrogate graves” for soldiers whose bodies were buried in overseas war cemeteries or could not be located. Usually erected in prominent civic areas such as town squares, parks, central intersections, or near public schools, these local monuments continue to be a focus for community Anzac Day services.

More than 90 per cent of local war memorials included a list of names. The criteria for inclusion of names varied. Sometimes only those who were born in or enlisted in the town were included. Other memorials listed those who were living or working in the town when they enlisted, or even those who became associated with the town after their military service.

Only in Australia was it common practice to include the names of those serving men and women who returned as well as those who died. Usually these names were listed separately. Where the names appeared together, those who died were often designated with a cross, asterisk, or dagger. Names were nearly always displayed in alphabetical order without any rank.

Local government bodies enquiring about federal government assistance in setting up war memorials and rolls of honour should contact: