Prior to the establishment of the Australian War Records Section (AWRS) in May 1917, the collection of war trophies and relics by Australian units was carried out in accordance with British War Office (BWO) regulations. In late 1916 BWO established a committee to deal with the disposal of trophies and relics: the best trophies would be selected for a British National War Museum (later to become the Imperial War Museum) and the remaining trophies distributed to the dominion countries. However, the Australian government, along with other dominion countries, resisted the idea, insisting trophies claimed by their troops should be made available to them. 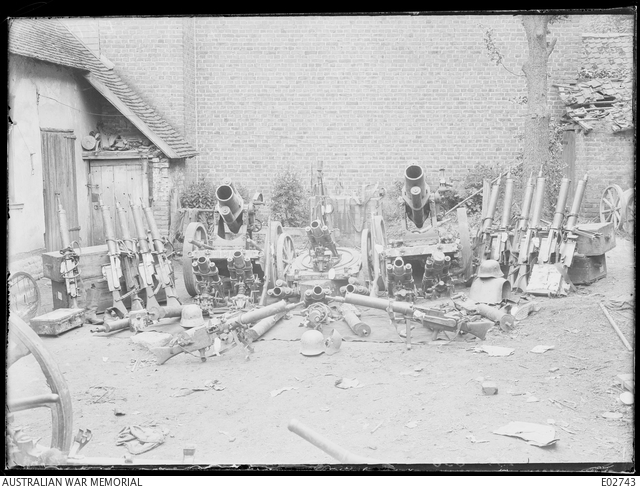 Trophies captured by the Australian troops during the battle of Hamel.  C363905

AWRS was initially responsible for the collection, preservation, and classification of all official documents relating to the AIF. This was later expanded to include photographs, trench and regimental magazines, sketches, personal memoirs, relics, and war trophies. By the end of 1917 AWRS controlled the administration of all war trophies captured by Australian units.

In France AWRS set up collecting depots at Bailleul (Australian Corps Headquarters), Boulogne, Peronne, Corbie, and Longeau. From here trophies were dispatched to Britain and then to Australia. In October 1917 Henry Gullett sailed for Egypt, where he established an office of the AWRS, also responsible for collecting trophies. Items were to be clearly labelled, contain the name of the unit that had captured the item, the town or area it was from, the time and place the item was found, and the unit’s wish for its ultimate disposal. The information was transferred to a history sheet or card for each item.

The trophies brought back to Australia fell into two categories. The first group consisted of large trophies, such as artillery pieces, machine-guns, trench mortars, and vehicles which required little protection from the weather and could be easily exhibited. The group was considered to be the best for distribution to towns. The second group consisted of small trophies, such as rifles, daggers, raiding clubs, bombs, and ammunition.

State trophy committees were established to administer the distribution of trophies and relics. Each committee consisted of one Senator, one Member of the House of Representatives, an AIF officer, a state government museum representative, and the Director of the Australian War Museum. The committees were administered from Melbourne, at the Exhibition Building (122 King Street) where the Memorial was located at the time.

Consideration was also given to items which had been captured by units raised in a particular area. Each town was required to nominate three trustees (one of them being an ex-member of the AIF) to act on behalf of the town. They arranged for the trophy to be permanently housed in a public park, garden, or building within the town. They also organised a simple handover ceremony and bore movement and installation expenses after the item was delivered to the nearest railway station.

Allocation of surplus trophies occurred in 1921 and 1922, and many towns acquired additional items for display. Once the trophy committees were disbanded the disposal of items became the responsibility of towns and the trustees.