During the First World War there were three types of identity discs issued to those serving in the Australian Imperial Force (AIF).

With the exception of members if the Royal Australian Naval Bridging Train, who appear to have been issued with the same identity discs as the AIF, those serving in the Royal Australian Navy were not issued with official identity discs. However, some sailors wore privately purchased or improvised discs, and in rare instances acquired examples of the 1907 Pattern disc.

The Royal Australian Air Force did not exist until 1921. Those serving in the Australian Flying Corps were part of the AIF and were issued the same identity discs as the rest of the AIF. 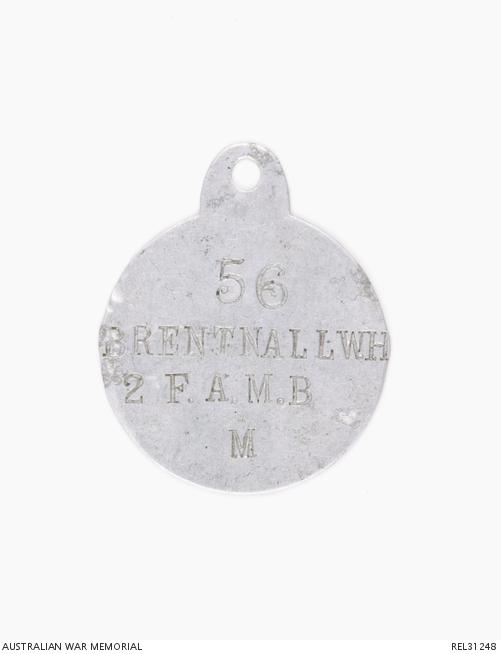 The first type of disc issued to the AIF in 1914 was the aluminium Pattern 1907 disc. Introduced by the British in 1907, this identity disc measured about 42mm high x 35 mm wide. Worn about the neck, it was stamped or engraved with the soldier’s details.

In August 1914, orders were circulated that each man wear an identity disc showing his name, number (if relevant), unit, and religion. Religions were indicated with the following designations:

Other protestant religions were to have their name denoted.

The illustration in the orders includes the letter “A” above the battalion, indicating the soldier's company. However, most identity discs - especially for later enlistees - only have the unit recorded, not the company, platoon or light horse squadron. This standard was not always followed, and there are many variations on what information was stamped or engraved on an identity disc. Some men added information on the reverse of their discs, including details and addresses of next of kin. 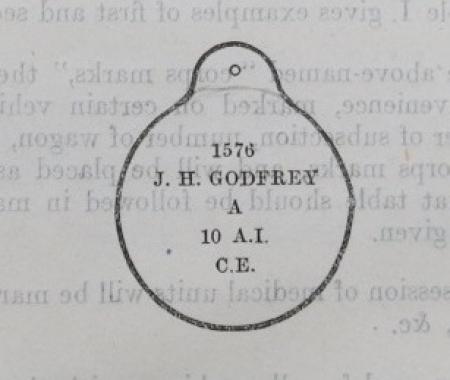 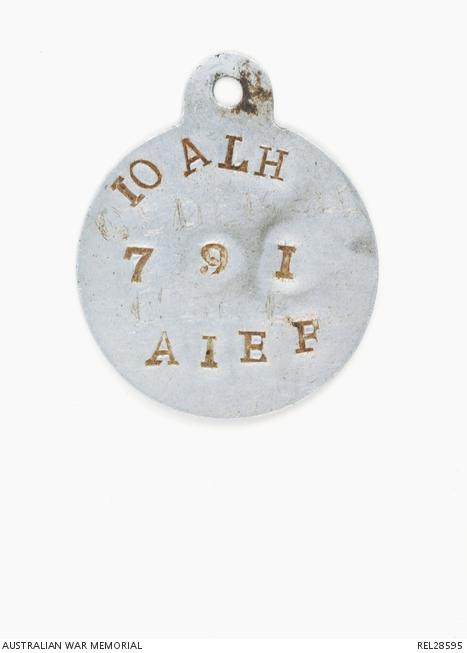 Unusual marking on an identity disc showing only the soldier’s unit, service number and AIEF 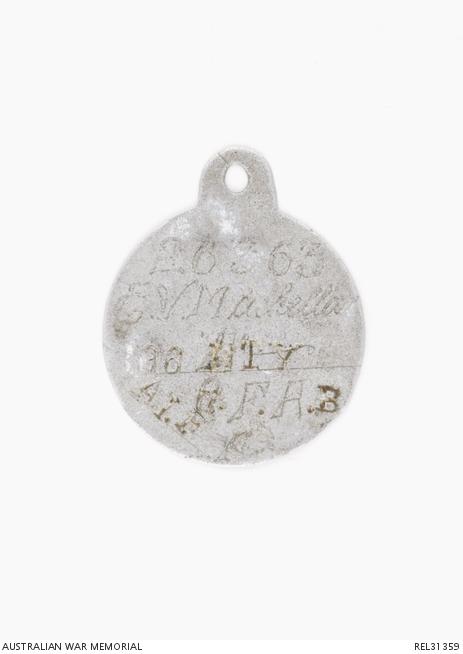 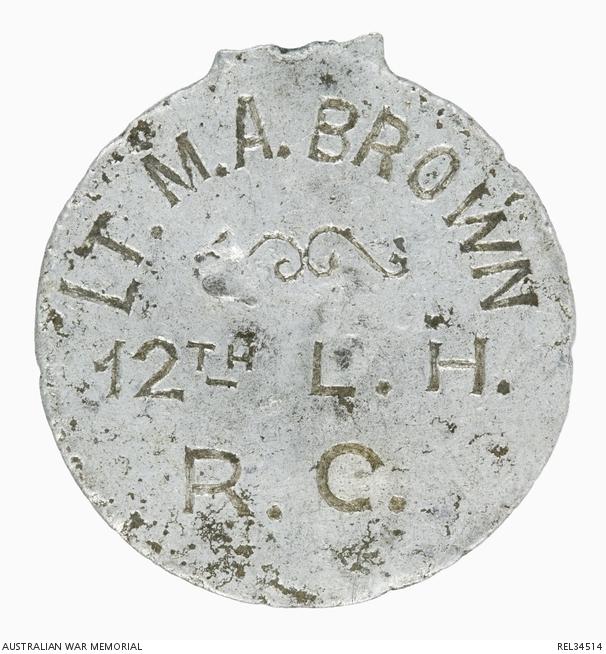 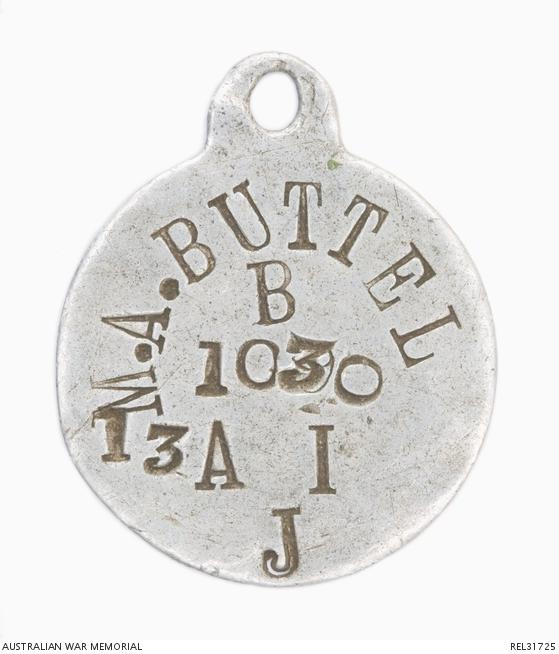 Pattern 1907 identity disc with the details stamped out of order. The name is stamped around the edge, then 'B' for B Company

Only other ranks had service numbers, officers did not. If a soldier was commissioned as an officer, he no longer had a service number recorded on his disc.

A man could have two or more service numbers throughout his AIF career. This could occur due to a transfer between units, but often happened when men were discharged from the AIF and later re-enlisted. 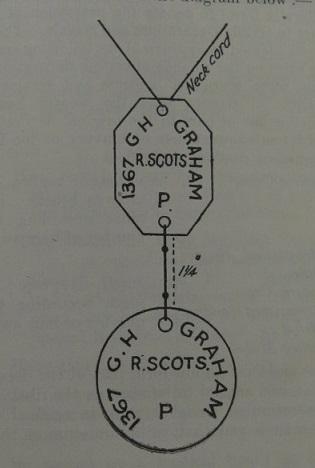 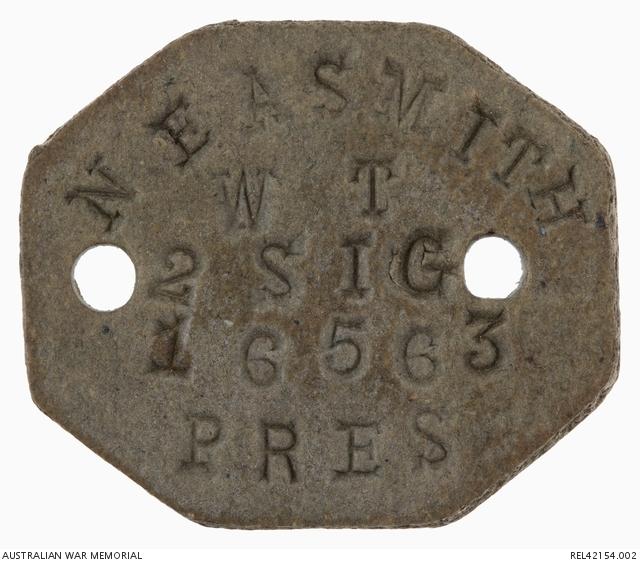 Example of Disc, identity, No. 1, green. 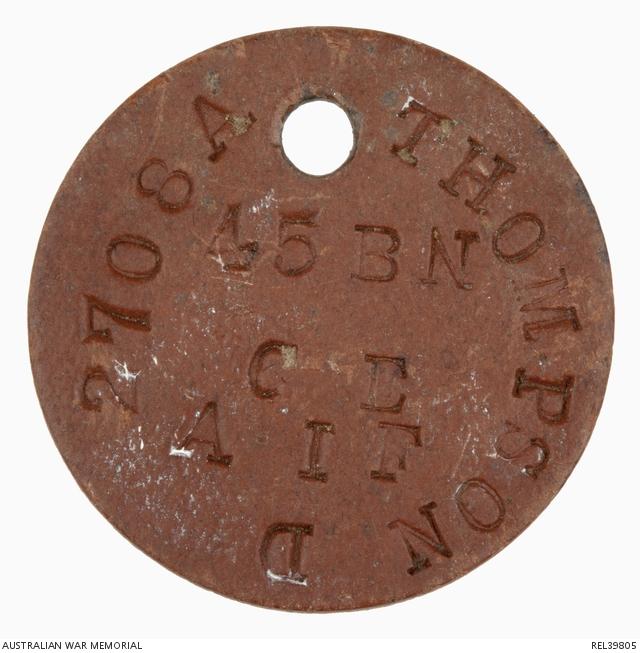 Example of Disc, identity, No. 2, red

Although regulations state that the green disc was to be secured around the neck, with the red disc attached to it by a short piece of cord, not everyone followed the regulations. Some men wore both discs on the same string, or wore them in locations other than around their necks.

Not all Australians were issued with the red fibre disc. If a soldier or officer already had a Pattern 1907 metal disc, he retained it and used it in place of the new red disc. Red discs were only supplied to men not in possession of a metal disc. For the first few months of allocation of the green disc, the AIF were unable to provide them to soldiers heading to the Western Front from the UK. As the first order of green discs was sent to France for distribution they were initially only allocated there. The first green discs were allocated to Australian units in France in late November to early December 1916. The 5th Division received 20,000 green discs to allocate to units in France in late November. 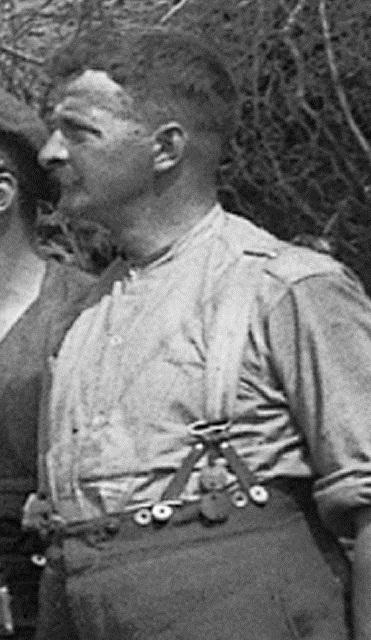 Detail from E02892 showing an artilleryman wearing his discs attached to his suspenders. 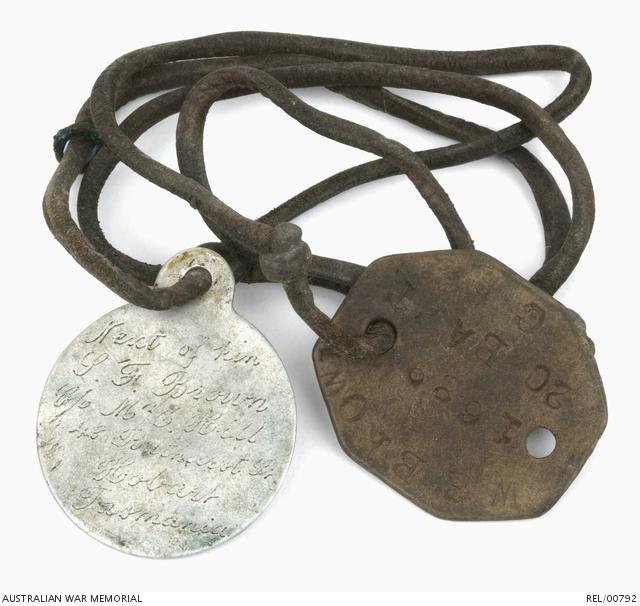 An example of a metal disc with green octagonal disc

In late 1917 a number of Australian newspapers published an article titled “Soldier’s Fears”, which noted:

Many soldiers have a horror of losing their identity discs, or of being unidentified if they are killed, and buried in a nameless grave. One man is known to carry little scraps of paper in every pocket, giving his name and regiment, so that his body may be recognised if he is killed.

Given that it was over two years from the declaration of war until the Department of Defence finally ordered two discs be worn, this fear could have contributed to large numbers of Australians wearing unofficial commercially produced or improvised identity discs in addition to their officially issued disc. Discs made from ground down foreign coins were particularly popular, as were identity bracelets. Given the level of destruction that was wreaked on the men serving on the front line as a result of shell- and machine-gun fire, it was wise to wear identification on multiple parts of the body. The photographs taken at Vignacourt by the Thuilliers show several examples of men wearing unofficial identity bracelets. 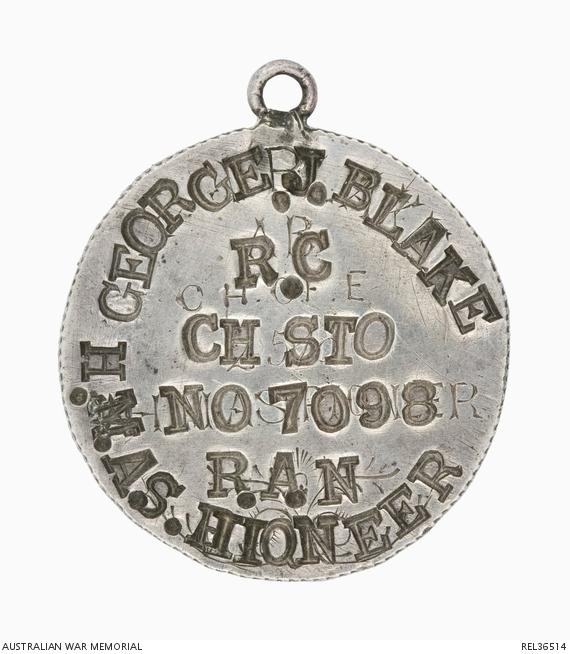 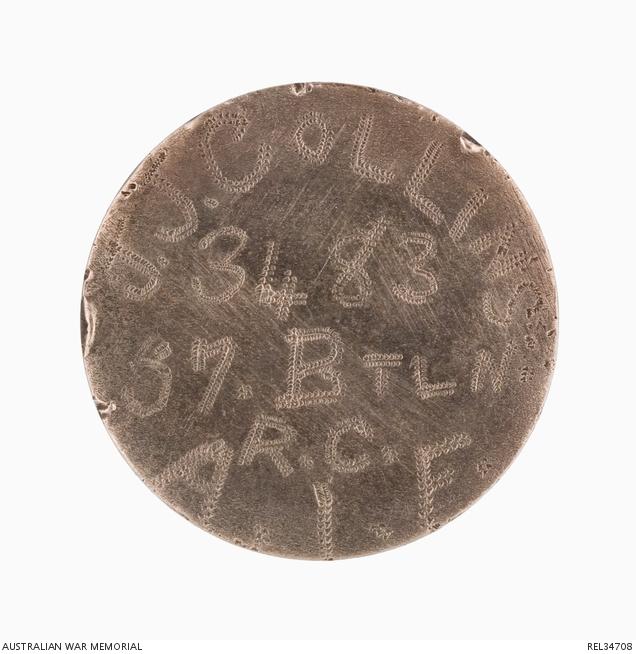 Improvised identity disc made from a French 10 centime coin. 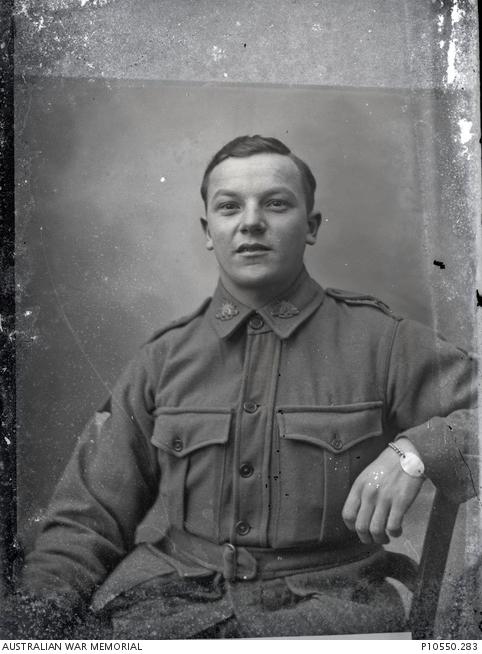 Portrait of an unidentified Australian soldier from the 2nd Division taken by Louis and Antoinette Thuillier in Vignacourt. 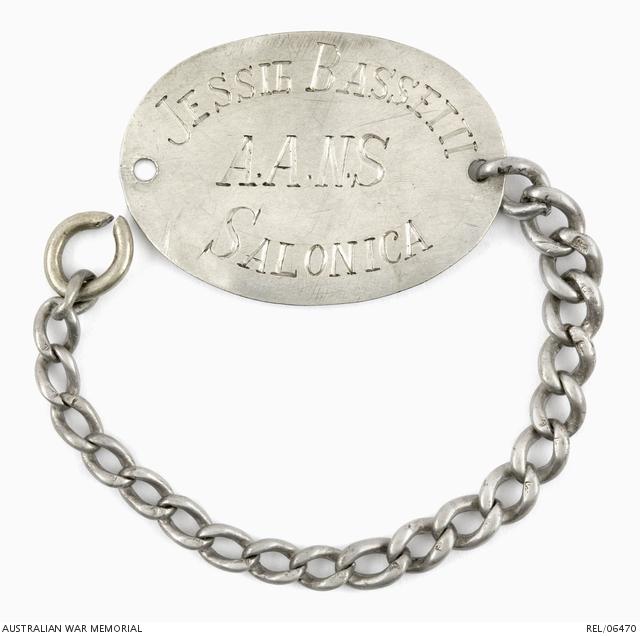 Private purchase identity disc given to a member of the Australian Army Nursing Service in 1917. 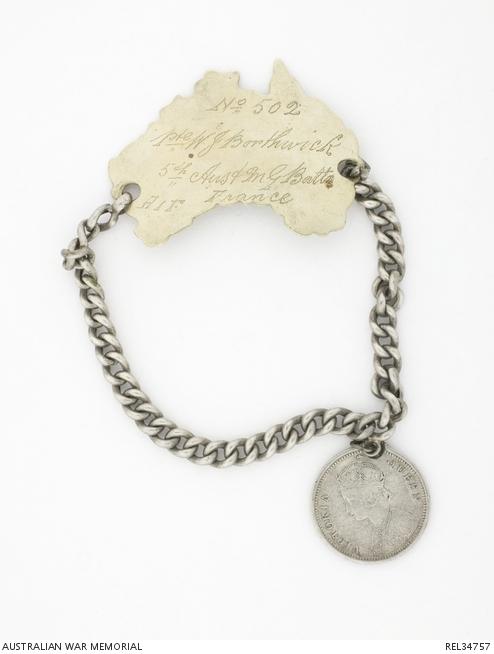 Improvised identity bracelet with the disc in the shape of Australia (excluding Tasmania). 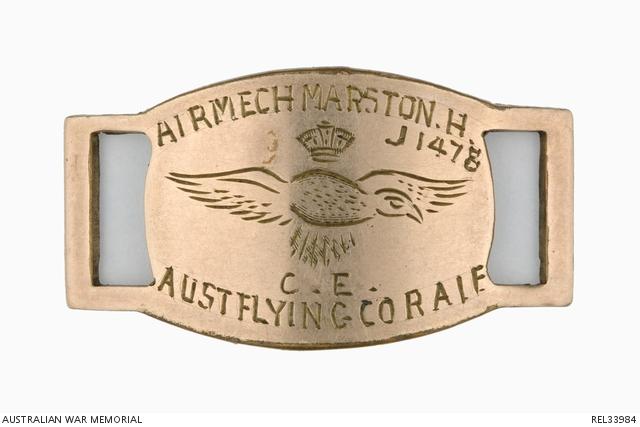 There are examples of identity discs that are similar to the Pattern 1907 disc, but are thicker and have the 1908 Australian Coat of Arms on the obverse. This disc is something of a mystery, and no records have been found regarding it.

A survey of discs of this kind held by the Memorial, by other institutions, or in private hands, has revealed something of its history. This disc appears to be a private-purchase disc with no government involvement, despite the coat of arms. The coat of arms is the outdated 1908 pattern (replaced in 1912). It was popular during the First World War among commercial manufacturers of jewellery and souvenirs, possibly due to the simplicity of the design compared with the official coat of arms of the period.

All of the sighted discs were engraved (one exception is a disc that had the unit overstamped when the soldier transferred, but apart from that, the disc was engraved). Officially issued discs were primarily stamped, and engraving is rare. Two of the discs were given as gifts to female relatives or friends with a short message from the soldier making the gift, indicating that the discs were sometimes purchased as sweetheart jewellery.

The majority of these discs were worn by men who enlisted and trained in Victoria. A few were worn by men who enlisted in other states but who embarked from Melbourne, indicating that Victoria is the point of origin for the discs. Most of the discs date from early to mid-1916. Few date to after this period, indicating that discs of this style reached peak availability or popularity up to the middle of 1916. 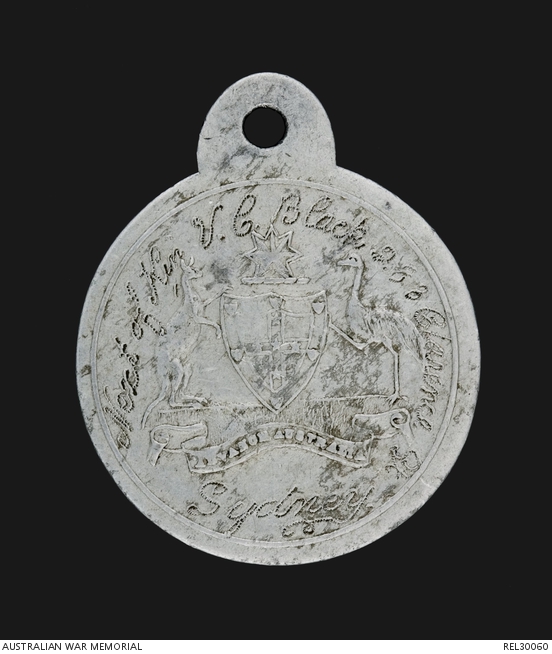 Identity disc with the 1908 pattern Australian Coat of Arms on the reverse.

Recovering discs from the dead

Regulations stated that “Anyone concerned in burying a soldier, or finding a body after an action, will remove the identity disc and pay book” (Field Service Regulations 1909 Part 2 133 (3)). As men were issued with one identity disc, this could cause problems with identifying remains at a later date if other identifying information was lost – such as grave markers being removed or destroyed. Despite the obvious need for more than one identity disc per man, it was not until late 1916 that orders were issued for soldiers to receive two discs each. 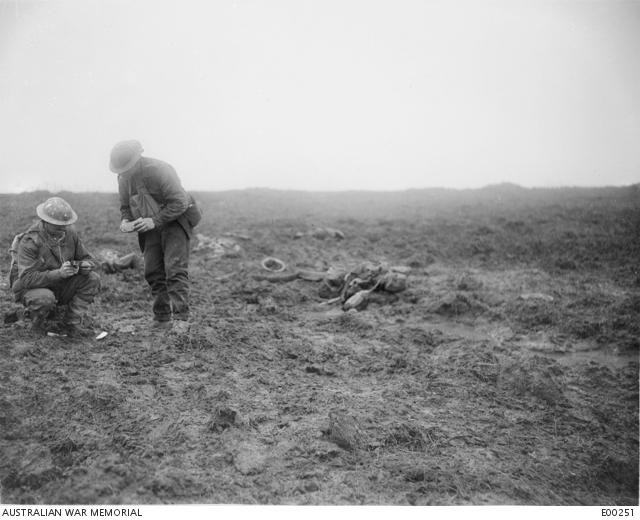 Although identity discs were official kit, issued by the AIF, they were sent home to the next of kin as personal items. Even the German Army returned identity discs of some of the Australian soldiers they buried. For example, the identity discs of many, if not all, of the men buried in the Pheasant Wood mass graves in 1916 were sent to AIF headquarters or directly to the families.

Regulations stated, “The pay book and identity disc of a deceased soldier, and any personal effects which may have sentimental value, will be sent with the least possible delay, by the officer under whose immediate command he was when he became non-effective, to the A.G.'s [Adjutant General] office at the base … effects will be forwarded to the officer in charge of records concerned” (Field Service Regulations 1909 Part 2 134 (1)). These would reach the families but it was sometimes several months after the soldier's death when their effects were received.

Even with the addition of a second disc in late 1916, reports were received of both discs being removed from remains before burial, negating the usefulness of the second disc. This was a regular occurrence that was reported in a variety of reports by different divisions. In September 1917, the 3rd Division noted that in one instance, 80 Australians were now classified as “unknown” because both identity discs had been removed from the bodies before burial (AWM25 135/3).