Sinking of HMAS Canberra in Battle of Savo Island 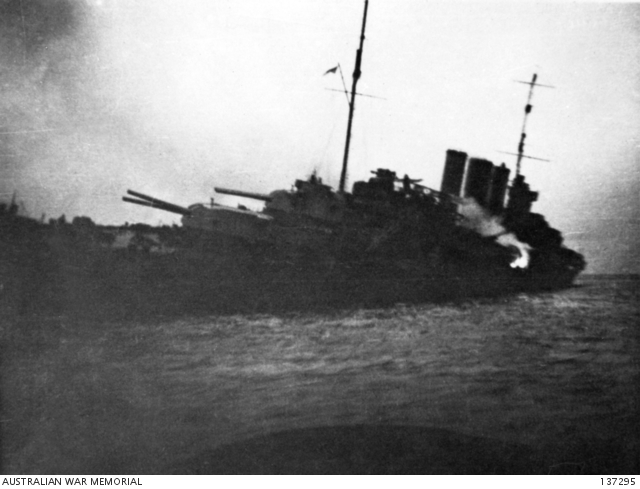 In the darkness of the early hours of the morning of 9 August 1942 the RAN heavy cruiser HMAS Canberra was severely damaged off Guadalcanal (Solomon Islands) in a surprise attack by a powerful Japanese naval force in an action that became known as the Battle of Savo Island. Canberra was hit 24 times in less than two minutes and 84 of her crew were killed including Captain Frank Getting. Following an order to abandon ship the Canberra was sunk the next day by a torpedo from a US destroyer.

At the time of the action the Canberra had formed part of a US Navy-RAN force screening American transports during the landing operations of US marines at Guadalcanal, which begun on 7 August 1942.

A failure of Allied intelligence and vigilance resulted in this screening force being surprised by a determined group of seven Japanese cruisers and a destroyer near Savo Island just before 2am on the morning of the 9 August 1942. The Canberra as the lead ship of the screening force was the first to be attacked and received the full force of the Japanese barrage. In the darkness and confusion the rampaging Japanese attackers wreaked havoc with other Allied vessels before withdrawing. However, despite this significant setback landing operations at Guadalcanal continued.

Casualties of the Battle of Savo Island

Sunk: the cruisers USS Quincey and USS Vincennes ; HMAS Canberra and cruiser USS Astoria were both so badly damaged they eventually sank.