The Royal Australian Navy sloop HMAS Yarra was launched at the Cockatoo Dockyard, Sydney, on 28 March 1935 and commissioned on 21 January 1936.

Displacing 1,080 tons, she was 81.1 metres long with a beam of 11 metres. She was armed with three 4-inch anti aircraft guns, four 3-pounder guns, a quadruple .5-inch anti aircraft machine-gun, and depth charges. She had a speed of 16.5 knots and a complement of 151.

Yarra's initial war service was in Australian waters, on patrol and escort duties. In August 1940 she left for the Middle East where she was used on patrol and escort duties. In April 1941 she escorted a convoy from Bombay to the Persian Gulf where she took part in campaigns against Iraq and Iran. This was followed by service in the Mediterranean in November-December 1941.

With the outbreak of war with Japan, Yarra left the Mediterranean for Javanese waters, arriving in January 1942. She carried out escort and patrol duties and on 5 February performed a particularly fine piece of rescue work when she took 1800 survivors off the burning troopship Empress of Asia.

On 4 March 1942, HMAS Yarra was sunk by a Japanese cruiser squadron in a gallant but hopeless defence of her convoy in the Indian Ocean, south of Java. A total of 138 of her company were lost, including her commanding officer, Lieutenant Commander Robert Rankin. 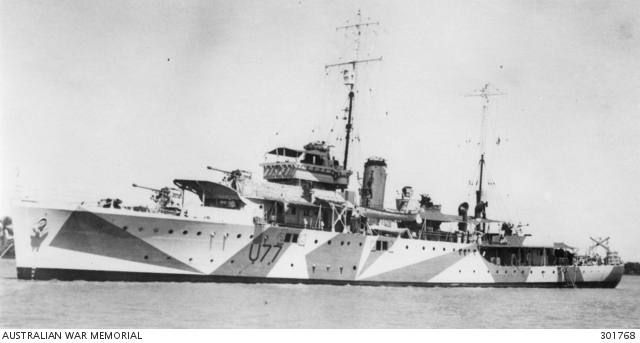