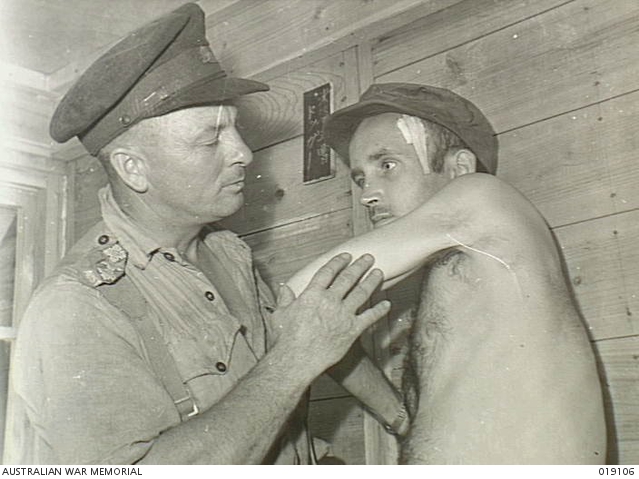 Afuna, Japan. 1945. A group of Australian War Correspondents visited a prisoner of war (POW) camp and found shocking conditions of cruelty. The camp was about fifteen miles out of Yokosuka Naval Base, and the Corespondents were the first to find the POWs. The camp was not registered (with the International Red Cross) and all the 103 occupants, comprising ninety eight Americans, four British and one New Zealander, were reported dead some time ago. The men had been cruelly beaten and maltreated, but for the past week or two they had better treatment and were given a chance to pick up. American planes had dropped comforts and clothing to them. The Japanese guards who had beaten the men were taken from the camp and replaced by others a week before the occupation. An example of the ill treatment is shown to Australian Army Captain John Goodchild of Melbourne, Vic (left). Ensign Fred Turnbull of Detroit was shot down over Formosa twelve months ago. Before he could free himself of his parachute harness he was shot twice through the shoulder and bayonetted twice although he was not armed. The Japanese later refused to treat the wounds. Since being taken to Afuna POW camp he has watched three of his best friends die from neglect and beatings. Food was rice, grass and thin bean soup.