"'Thunder of a light horse charge'. This photograph has been described as one of the charge of ... 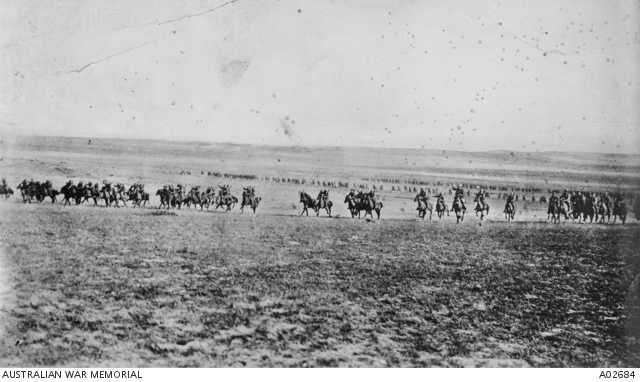 "'Thunder of a light horse charge'. This photograph has been described as one of the charge of the 4th Light Horse Brigade at Beersheba on the 31st October 1917, taken by a Turk whose camera was captured later in the day. An enquiry undertaken with the object of establishing its authenticity revealed that it was probably taken when this brigade staged near Belah, in or about February 1918, a representation of the charge for a cinematographer." Above is the original caption for this photograph. The photograph has been the subject of controversy, insofar as a number of claims have been made in relation to its origins. Once the prospect of the photograph being taken by a Turkish soldier was disproved, it was thought that the photograph had been taken by 2169 Pte Eric George Elliott of the 4th Light Horse Machine Gun company. Pte Elliott was said to have been operating as a range finder when the charge passed him on 31st October. However, it is unlikely that this is a photograph of the actual charge. The real charge took place over bare ground on a slight downwards slope, and the horses were partially obscured by the dust they kicked up. Both riders and horses, unlike those in this image, were carrying all their kit and equipment. As the original caption suggests, it was probably taken when two regiments of the 4th Brigade, Australian Light Horse, re-enacted the charge for the official photographer Frank Hurley, at Belah on 7 February 1918. Hurley's diary records filming such a re-enactment, although none of his footage taken on the day remains. It is probable that another person photographed the event.