Corporal (Cpl) Arthur Percy Sullivan, VC, of the 45th Battalion, The Royal Fusiliers on the ... 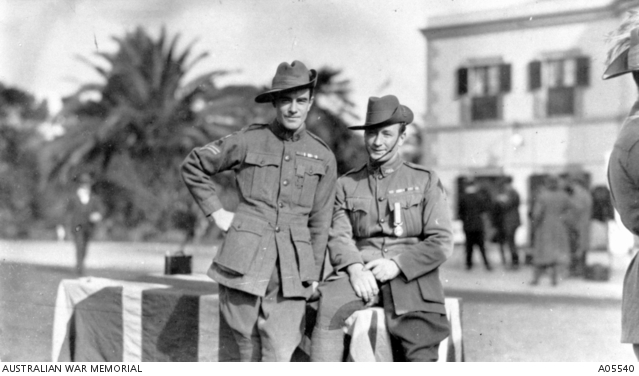 Corporal (Cpl) Arthur Percy Sullivan, VC, of the 45th Battalion, The Royal Fusiliers on the occasion of his investiture at Adelaide. He is wearing his Victoria Cross (VC), and is standing beside another soldier, a corporal who had been awarded a Military Medal (MM). Cpl Sullivan was awarded the Victoria Cross, for bravery on 10 August 1919 at Sheika River, North Russia. While under intense fire, he had rescued an officer and three men from drowning when they fell into a deep swamp. Like all Russian campaign soldiers, Cpl Sullivan, an Australian, had originally served in the First World War in an artillery regiment.

The unidentified Corporal has what appears to be a diamond shaped colour patch which does not correlate with these two units.