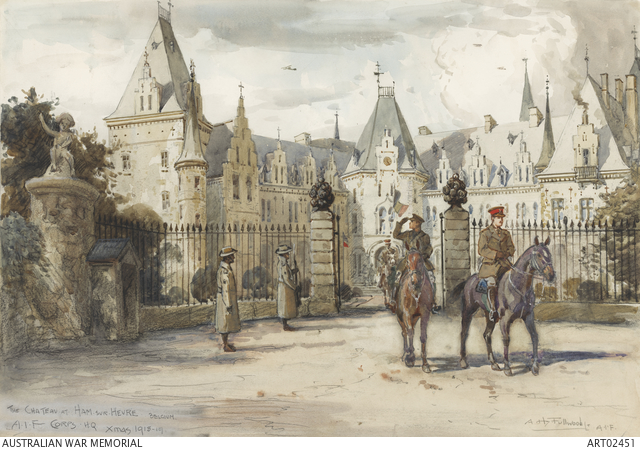 Depicts the visit of the Prince of Wales to the chateau at Ham-sur-Heure during the Christmas and New Year of 1918-19. The chateau was used as the headquarters for the Australian Imperial Force Corps in the liberated areas after the Armistice. Two horsemen are riding past sentries at the gate of the chateau, on the left is HRH Prince Edward, Prince of Wales (later King Edward VIII), and the other is Major General (later Lieutenant General) Sir Joseph J Talbot Hobbs, KCB, KCMG, VD, commanding Australian Field Artillery, 5th Australian Division (later Aust Corps). The Prince was Major General Hobbs guest and while at the chateau, visited the different Australian Divisions and distributed medals and decorations to the Australian soldiers.
Albert Henry Fullwood was born in Birmingham, England in March 1863. In 1883 he sailed to Australia and began work as a lithographic draughtsman , working on the staff of illustrated journals such as 'Australian Town and Country Journal' and the 'Bulletin'. In 1900 he went to the United States, then to London, as an expatriate artist where he worked as a freelance illustrator, receiving commissions from newspapers and journals, including the London 'Graphic' and designing postcards. From April 1915 until November 1917 Fullwood served with the Royal Army Medical Corps as an orderly at the 3rd London General Hospital at Wandsworth in the company of fellow artists Coates, Roberts and Streeton. He was subsequently appointed an official war artist , attached to the 5th Division AIF, working in France between May and August 1918 and from December 1918 to January 1919. His major contribution as a war artist was to record aspects of the war which others may not have noticed or taken for granted. His works have a narrative element and captured Australian soldiers in 'straightforwardly picturesque views of their environment'. Fullwood returned to Australia in 1920 after his commission had been terminated and became a foundation member of the Australian Painter Etcher's Society in 1920 and the Australian Watercolour Institute in 1924. He died from pneumonia in October 1930.