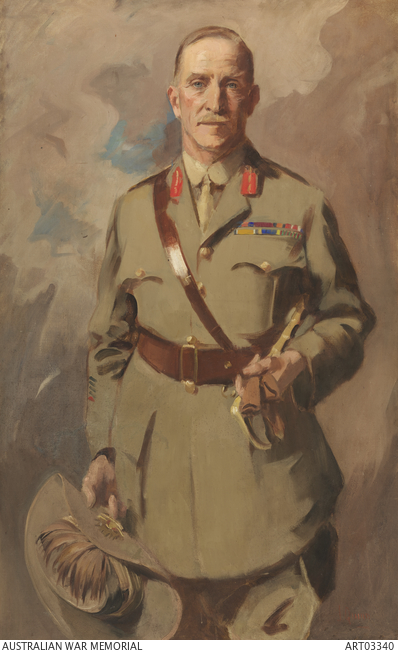 James Quinn, official war artist, was commissioned to paint the portrait of Lieutenant General Sir Henry George 'Harry' Chauvel, GCMG, KCB in 1919. Chauvel had a solid military career prior to the First World War. At the time of the Boer War, Chauvel was a captain in the Queensland permanent forces. He commanded A Squadron of the Queensland Mounted Infantry in South Africa and returned to Australia to take command of the 7th Commonwealth Light Horse; the war ended before they saw action. Chauvel then served as Chief of Staff with the Northern Rivers District until 1911. He was promoted to lieutenant colonel in 1909 and in July 1914, as a full colonel, he became Australia's representative on the Imperial General Staff in London.

Chauvel served on Gallipoli as commander of the 1st Light Horse Brigade. Arriving on 12 May, he took command of a sector that included Quinn's Post, Courtney's Post, and Steele's Post, each the scene of heavy fighting. Illness forced his evacuation and he spent June and July in hospital, returning to take command of the New Zealand and Australian Division in September 1915. In November he was given command of the 1st Australian Division and was promoted to major general.

Given his choice of commands in Egypt after the evacuation, Chauvel took charge of the Australian and New Zealand Mounted Division; in June 1916, he became the General Officer Commanding, AIF in Egypt. Chauvel won the first decisive British victory of the war when he defeated the Turks at Romani, stopping their second attempt to reach the Suez.

In August 1917 Chauvel became the first Australian to permanently command a corps: the Desert Mounted Corps, comprising British, Australian, and New Zealand units. His appointment followed two failed attempts to take Gaza. The third attempt involved a flanking manoeuvre necessitating the capture of Beersheba, duly achieved through the famous mounted charge by the 4th Light Horse Brigade. Success there opened the way for the eventual advance through Palestine that ended with the Turkish surrender in October 1918. Chauvel has been described as a commander that understood the capabilities of his mounted troops; used them wisely, taking calculated risks and withdrawing when necessary; and kept losses to a minimum.

Chauvel returned to Australia in late 1919 and was appointed Inspector General, the Army's most senior post; he retained that position until 1930. Meanwhile, he had been promoted to lieutenant general and appointed Chief of Staff. In November 1929 he was promoted to general, becoming the first Australian to reach that rank. He retired from the Army in April 1930.

During the Second World War, Chauvel took up the post of Inspector General of the Volunteer Defence Corps; he held this post until his death on 4 March 1945.