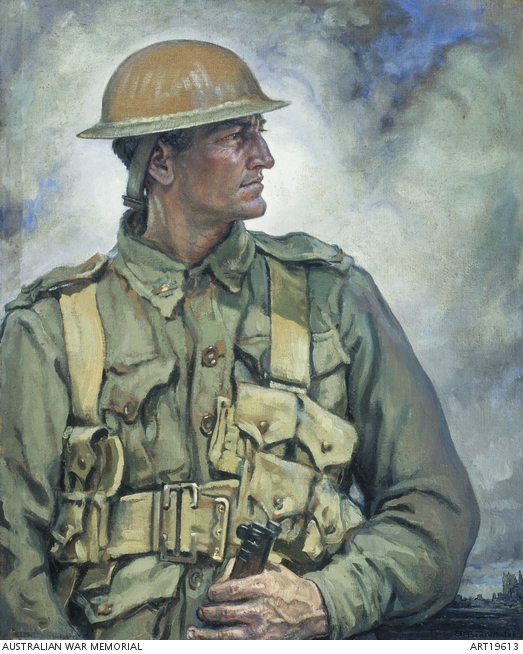 'The First World War left indelible scars on Hilda Rix Nicholas's psyche and her painting 'A man' is imbued with that experience. Rix Nicholas chose a returned serviceman as the model for 'A man'. But this painting is no mere studio portrait of a stereotypical soldier. 'A man' is a very sensuous rendition in which the act of painting becomes the act of dressing her lost husband who was killed in action in 1916. There is a tactile quality to the brushstrokes which lovingly create pockets, buttons, pouches for ammunition and creases in the sleeve. 'A man' depicts both a named and unnamed ANZAC hero. There is a feeling, also, that the soldier's outer 'skin'; his tin helmet, webbing, ammunition pouches and rifle may ultimately fail as protective armour on the battlefield. The figure is framed by turbulent skies, and this suggests his extremely tenuous hold on survival and the ultimate frailty of humans, irrespective of their battle dress. This is a portrayal of vulnerability as much as it is of strength.' [Text paraphrased from a paper by Catherine Speck, not cited or dated].