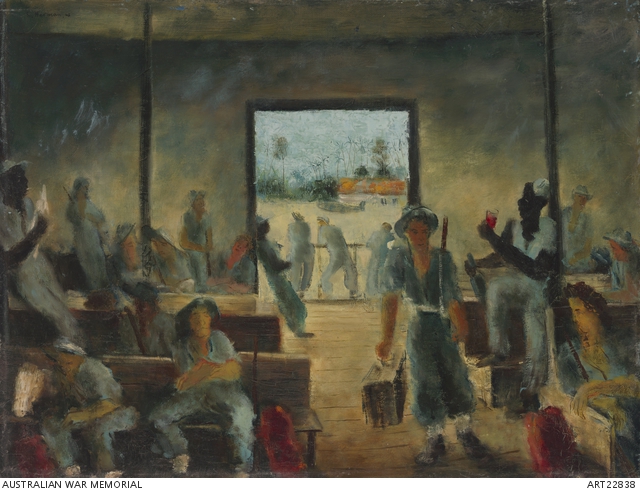 Australian Military Forces, airfield waiting room, Finschhafen, New Guinea. 'I made the sketch to this painting about the middle of June 45. At that time [Finschhafen] was most likely one of the busiest airports in the world, quite a contrast to when I saw it after the surrender, when it seemed dead. Men came from everywhere and had to wait for further transport. Sitting and standing in the waiting room were Australians, Americans, and Negroes in an atmosphere of smoke, boredom and tiredness.' Sali Herman, Finschhafen, New Guinea, 1945

Herman enlisted in the Army in 1941 and was assigned to the First Camouflage Section. He later became a sergeant with the 3rd Royal Australian Engineers Training Battalion at Kapooka. He was appointed an official war artist in 1945 and worked in the Pacific for five months, recording scenes in Lae, Torokina, Bougainville and Rabaul.